The UESPWiki – Your source for The Elder Scrolls since 1995
< Lore: Places: W(Redirected from Lore:Wellspring Grove)
Jump to: navigation, search 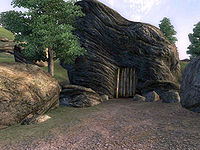 Wellspring Cave is a natural cave found on the shores of the Heartlands, in the province of Cyrodiil. The cave is connected to an island containing the Wellspring Grove. It is found in eastern waters of Lake Rumare.

Like various other natural caves in Tamriel, the Wellspring Cave is theorized to have served as a capillary for the living body of Nirn, and once pulsed with the living essence of the Aedra who created it.[1]

Wellspring Cave is used by the Mages Guild at the Arcane University. When an associate is promoted to an Apprentice, they are tasked with acquiring a staff from an island grove that is connected from Wellspring Cave. The wood found at the grove is used to craft Mage Staves, and so several mages tend to the cave and grove.[2]

In 3E 433, the Order of the Black Worm had begun to make their appearance in Cyrodiil, targeting the Mages Guild in various ways. A group of their coven had attacked Wellspring Cave, killing the mages that resided in the cave. An Apprentice of the Mages Guild had arrived into Wellspring Cave in the aftermath, dealing with the last of the necromancers and obtained their staff.[3] Afterward, the Council of Mages began to investigate the situation.