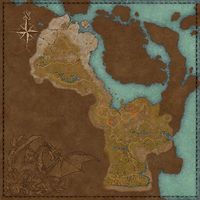 A map of the Pact territory and surrounding areas

Thornmarsh is a coastal region in northeastern Black Marsh.[1] It is bordered by Shadowfen to the west, Morrowind to the north, and the Padomaic Ocean to the east. The region contains the city of Thorn.

The Argonian tribes of Thornmarsh were one of three regions of Black Marsh to join the Ebonheart Pact at its founding in 2E 572.[2] The Four-Spike Wattle is an arrangement of throat spines particularly popular on the coastal shores of Thornmarsh.[3]