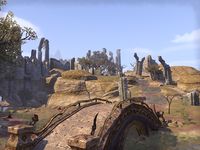 Thormar (alternatively called Thormar Keep)[1] is an Ayleid ruin located in the border region of Reaper's March, in the province of Valenwood. Thormar is a rather insignificant ruin, but it is the gathering place for Baan Dar's Boast, a celebration between the Wood Elves and the Khajiit, where both factions prank and pull practical jokes with each other for the chance to partake in Baan Dar's Five Fingers Dance.

Thormar was constructed by the Ayleids, but like the rest of their settlements, it was abandoned as time went on. The land around it was claimed by both Wood Elves and Khajiit. A conflict ensued in the fields around Thormar between these two races. The Khajiit were led by Yenamu Frost-Fist, a powerful mage. Eventually, the Bosmer overwhelmed the Khajiit, leaving only Yenamu standing. She and the remaining warriors held of the Wood Elves for an hour straight until only Yenamu remained, and she was struck down by a stray arrow that pierced her eye.[2]

Ever since 2E 557, the Wood Elves, and the Khajiit gather at Thormar to partake in Baan Dar's Boast, a celebration of the ideals of Baan Dar, the Bandit God of the provinces of Valenwood and Elsweyr.[3] Baan Dar's Boast is an honest celebration with the sole purpose of proving oneself to Baan Dar and to join his Five Fingers Dance.

During the Imperial Simulacrum in the late Third Era, the town of Thormar Keep was an active settlement, being under the rule of Count Karocher. It had a rivalry with Karthdar Square.[1] It was neighbored by several settlements, including Arenthia in the northeast, Ebon Ro in the west, and Stone Fell in the southwest.[4]