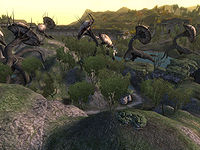 The Fringe is a region of the Shivering Isles located on the western side of the main landmass. Although it appears to be located in the lands of Dementia, the Fringe is considered to be completely separate from the realm proper. It is surrounded by high walls, preventing those within from entering the rest of the Isles until they have received Lord Sheogorath's "gift" of madness and can enter the realm through the Gates of Madness.[1] It is the first place to be destroyed during any Greymarch.[2]

The Fringe has one main settlement, the town of Passwall, where mortals who find themselves in the Isles live while they wait for Sheogorath's blessing to take hold.[1] The Fringe is under the same justice system as the Isles proper, but as no guards are posted within its walls, the bounty only comes into effect once the criminal passes through the Gates of Madness.[3][4] The Gardens of Flesh and Bone can also be found here,[4] as can the so-called Garden of Swords where weapons are grown from the soil.[5]

Circa 3E 433, a portal opened on a strange island in Niben Bay, inviting mortals to enter the Fringe and become Lord Sheogorath's champion. Most who entered became mad or were killed; many attempted to storm the Gates of Madness, but were slaughtered by the Gatekeeper of the Fringe. The Champion of Cyrodiil managed to kill the Gatekeeper, leaving the Gates defenseless until a new one could be created later that year. In the interim, mortal visitors to the Isles were sent to Xedilian rather than the Fringe.[6]

During the Greymarch of 3E 433, the Fringe was lost to the forces of Order, leaving the landscape barren and dead. However, it was retaken by the remnants of Sheogorath's army when the Champion of Cyrodiil managed to shut down the Obelisk of Order within Xeddefen.[6]

At some point after 3E 433, Talym Rend entered the Fringe through the portal in Niben Bay to petition Sheogorath, and killed the Gatekeeper to enter the Isles proper.[5]