The Black Dragon was mysterious individual who worked for the Order of the Hour as their First Sword, hunting down members of the Dark Brotherhood in the Gold Coast around 2E 582. Initially, she was an Imperial assassin named Lyra Viria who served as a Silencer of the Brotherhood, stationed in Xith-Izkul Sanctuary until its purification. Following that, she defected to the Order of the Hour under the guidance of Primate Artorius Ponticus. 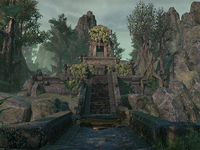 "She was an assassin. She killed on command and with impunity, leaving a graveyard full of corpses in her wake. She's a member of the Dark Brotherhood. That is, she was. Until they pushed her too far." ―Lyra Viria[1]

The Black Dragon was originally a member of the Dark Brotherhood known as Lyra Viria. Lyra was stationed at the Xith-Izkul Sanctuary, located between Blackwood and Western Argonia.[2] She was friends with many of the assassins in the sanctuary, including Green-Venom-Tongue.[3] Venom and Lyra had joined the Brotherhood around the same time, and we're told horror stories by the veteran members of the group. Among them was the story of Brombar, an assassin who betrayed his brother. Brombar was mortally wounded by his sister, who left him so that the Wrath of Sithis could claim his soul while he was fully aware of what was happening. Venom said that he and Lyra couldn't sleep soundly for a week after that.[4] 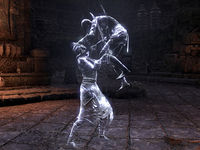 Lyra purifies her sanctuary, killing many of the people she was close to in the process

Before long, Lyra reached the title of Silencer, a high rank in the Brotherhood that was granted to those who showed promising skill and devotion.[2] Green-Venom-Tongue noted her as the most skilled of any assassin in the sanctuary.[3] For unknown reasons, the Black Hand ordered a Purification on the Xith-Izkul Sanctuary. As silencer, Lyra was ordered to kill the members of the sanctuary, a difficult task as she was close with many of them.[2] Green-Venom-Tongue was spared, having been on a special mission and therefore no part in the matter, and was led to believe Lyra died in the purification.[3]

Once the deed was done, Lyra prayed at the Statue of Sithis, questioning him if all the deaths were what was truly right for the Dark Brotherhood. Speaker Arawen arrived, assuring Lyra purification of the sanctuary was by Sithis' will. Almost immediately, she assigned Lyra's next task of assassinating Primate Jonas of the Order of the Hour. Lyra requested time to grieve for her fallen brothers and sisters, though Arawen scolded her for it, saying that she was a weapon and such bonds were weakness.[2] 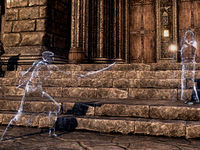 Lyra traveled to the Cathedral of Akatosh in Kvatch, where she met Artorius Ponticus. Artorius told her that it was he who ordered the assassination of his superior, Primate Jonas, and that his true goal was to meet with Lyra instead. Artorius offered Lyra redemption, promising her that Akatosh would forgive her if she put her talents toward serving the Dragon God. He offered her to become his champion, the First Sword of the Order, a "Black Dragon that burns away evil's darkness". Lyra accepted, defecting from the Dark Brotherhood and joining the Order of the Hour. Under Artorius' command, she assassinated Primate Jonas, so that he could usurp his place.[2][1]

Lyra became The Black Dragon, a warrior of Akatosh with the rank of First Blade, and no longer considered herself Lyra Viria. Being part of the Order was not the same being part of the Brotherhood. Lyra considered her fellow assassins as family, and the members of the Order instead respected and feared her. They showed love for no one except Akatosh, and perhaps Primate Artorius. The Black Dragon was cocksure of her actions in the Brotherhood for most of her time there, and originally in the Order, but began to feel discontent.[5] 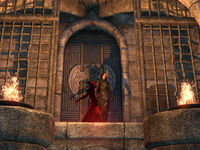 As the First Blade, Primate Artorius assigned the Black Dragon the task of hunting down Brotherhood members and finding the Sanctuary operating within the Gold Coast. The Black Dragon killed a number of members, both new initiates and veteran assassins, including two named Van[6] and Symdul.[4]

The Black Dragon continued hunting members, and eventually captured Cimbar. She assigned Grand Sermonizer Fithia to torture Cimbar for information.[1] Cimbar refused to reveal the location, and perished from the torture, and Fithia cast a spell on his body, which caused Tanek to be chained to the floor. She later went to the Enclave of the Hourglass, and met the Vestige under the name of Lyra. She questioned the Vestige on whether they had regrets, saying Primate Artorius believed everyone was worthy of redemption, and led her to the Black Dragon's chambers. Mirabelle Motierre, seeking revenge on the Black Dragon for killing Cimbar, waited in her chambers in order to murder her. Mirabelle accidentally revealed her plan to Lyra, who swiftly killed Mirabelle, and threatened the Vestige.[2]

The Black Dragon later found Brema, and had her reveal the location of the sanctuary before slitting her throat. She told Primate Artorius of the sanctuary's location,[1] and set out to Knightsgrave after the Enclave of the Hourglass began to feel to confining for her.[7] 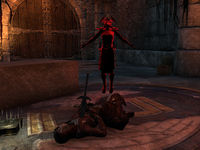 Lyra kills Venom in the halls of Knightsgrave

"I sought out the ruins of Knightsgrave after the Enclave of the Hourglass began to feel too confining, too full of life. I don't deserve to mingle with so many vibrant, living beings. Death has become more than my vocation—it's a vital part of my life. So why not linger in this place of the dead?" ―The Black Dragon[7]

Lyra traveled to Knightsgrave, an ancient headquarters for the Order of the Hour, now in ruins. She researched the founders and their statues, admiring their actions, specifically the original First Sword Justia Desticus. She later discovered the braziers served as a key into the inner parts of Knightsgrave, and quickly deciphered how to activate them. She found many Minotaurs within, taking careful measures to ignore them. The Black Dragon then came across the Paragon's Crown, a large circle with pillars surrounding it, and prayed to Akatosh.[7]

Further into the ruins she found the grotto of Knightsgrave, which contained a large statue of Akatosh built by the Alessian Order in the First Era. The many cages suggested the Alessian Order performed darker rites than the Order of the Hour did in Kvatch. The Black Dragon then defected from the Order of the Hour, hating the Primate and the Dark Brotherhood for turning her into what she became.[1][7] 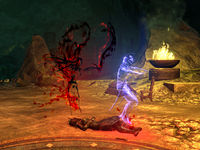 The Dark Brotherhood then discovered Lyra was hiding out in Knightsgrave. Astara Caerellius sent Green-Venom-Tongue and the Vestige to kill the Black Dragon. Lyra sent many shadows to communicate to them, warning them to go back. The ignored her pleas, and after they had been separated, she impaled Green-Venom-Tongue with a sword, mortally wounding him before he said his last words to the Vestige.[2]

"And here we are. I'm ready to die. Let's see if you're good enough to kill me." ―The Black Dragon to the Vestige[1]