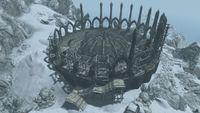 The unfinished Temple of Miraak circa 4E 201

The Temple of Miraak is a structure located in the center of the island of Solstheim. It served as the stronghold of Miraak in ancient times, before it was destroyed by the Dragon Cult. Renovations began on the ruins in 4E 201 when Miraak attempted to return to Tamriel, but were left incomplete with Miraak's defeat.[1]

In the Merethic Era, Miraak served as a Dragon Priest in the Dragon Cult of Skyrim. However, he turned on his dragon overlords and began devouring their souls to increase his own knowledge of the thu'um. He then fled to the island of Solstheim, which, according to legend, was originally a part of mainland Tamriel before a titanic battle between Miraak and Vahlok the Jailor sundered it from Skyrim. Miraak then built his temple, a vast complex that extended deep underground. The dragons did not let his treachery go unpunished, however, and they burned his temple to the ground. Miraak escaped by fleeing to Apocrypha, the realm of his master, Hermaeus Mora. The underground ruins of his temple were forgotten, inhabited only by undead guardians. Miraak's Black Book, Waking Dreams of A Starless Sky, which he had used to enter Apocrypha, was kept in the lower reaches of the temple.[1]

In 4E 201, Miraak began preparing for his return to Tamriel to escape Mora's clutches. He used his unparalleled knowledge of the thu'um to bend the will of the populace of Solstheim, forcing them to convert the All-Maker Stones into shrines, thus corrupting the Oneness of the land and cementing his dominance. The Tree Stone was located above the ruins of his temple, and was incorporated into a large above-ground structure which linked up to the underground passages. Hypnotized citizens of Solstheim worked on the construction of the new temple, and the ancient ruins were used as a base of operations for the deluded cultists who oversaw construction.[1]

The temple was infiltrated by the Last Dragonborn and a Skaal woman named Frea in an attempt to discover the reason for the strange happenings on Solstheim, and the Black Book was taken from the ruins. Unlike the other All-Maker Stones, the Tree Stone was imprisoned within Miraak's new temple and was unable to be cleansed by the Last Dragonborn through use of the thu'um. The Stone was finally freed from corruption after the death of Miraak within Apocrypha. With his influence gone, construction on the Temple of Miraak remained incomplete.[1]