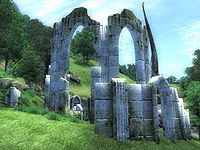 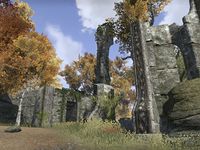 Sercen is an Ayleid ruin in the Heartlands of Cyrodiil, found north of Lake Rumare at the crossroads of the Silver Road.[1]

During the height of Ayleid rule, Sercen was a settlement infamous for brutalizing Nedic slaves. Legends speak of "the gut-gardens of Sercen", one of many examples of "art-torture" that slaves were subjected to for the Ayleids' pleasure.[2] Following the fall of the Ayleids, Sercen was sealed shut and fell into ruins.

In 2E 582, a band of mercenaries led by a Redguard named Rasha laid claim to the loot within the ruins, and set up camp outside while attempting to unseal the entrance.[3]

By 3E 433, the ruins had been opened and were occupied by marauders and bandits.[1]