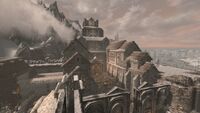 The Palace of the Kings (also spelled Palace of Kings,[1][2] and known historically as the Palace of Ysgramor)[3]:550[4][5] is a large castle at the far end of the Valunstrad district in Windhelm. It is one of the last remaining structures from the days of the First Empire of the Nords and is home to the hold's Jarl.[6]

Ysgramor built the palace so as to tower over the city, showing man's dominion over the very winds that had caused Yngol's death on the voyage from Atmora. He also had the palace built so he could always look upon the hill of his dear son's resting place, and feel that his line would know peace in this new home that was never known in Atmora.[7]

When the city was damaged during the Second Akaviri Invasion, the invading Akaviri burned and looted the Palace of the Kings.[8] Jorunn was crowned High King in the palace three weeks after the Akaviri were defeated,[1] but elected to repair the rest of the city before the palace, temporarily displacing the court and ruling from Stone-Fist Hall by 2E 581 until repairs were complete.[8][9] A number of stone chunks from the damaged Palace had illegally found their way into Nord homes during the Interregnum.[4] The repairs on the Palace was nearly completed some time after 2E 582, but it was sacked by Greymoor vampires working with the Icereach Coven, who kidnapped King Jorunn when he was giving a tour of the palace.

The building remained standing by 2E 864,[6] and in 4E 201, the palace serves as the headquarters of the Stormcloaks, under the leadership of Jarl Ulfric Stormcloak, who sits upon the ancient Throne of Ysgramor. And so the Palace of the Kings is, as such, the center of the pro-Nord war effort in the Civil War.[3]:263