Nord cuisine reflects the harsh climate and rugged landscape that has shaped their warrior culture. Where farming is difficult, wild game supplies a significant portion of the local diet. These meats can be preserved through smoking, drying, pickling, or salting. A good deal of fish also features, such as salmon caught in the quick-flowing White River. Among the most mouth-watering Nord foods, however, are those served at great feasts. Large roasts of mammoth, horker, and assorted game meats are cooked over a spit in the center of the hall, while rustic desserts made with juniper or snowberries are cooked in cob ovens.

Braided Bread is often reserved for special occasions. This beautiful bread is made in the heart of midwinter, when stores are running low and better weather seems a long way off. It makes use of some preciously guarded ingredients with the inclusion of dried fruit, nuts, and spices. All in all, it makes a special loaf that promises better days to come, while celebrating the harvest of the previous year.

Garlic Bread is bread that has been cooked with butter and garlic. It is often paired with soup.

Lavender and Honey Bread is a popular bread in Whiterun, where lavender grows wild and countless beehives are kept to provide the meaderies with enough honey for their mead production. The honey and lavender are such a natural pairing that they are combined not only for the mead but also in this flavorful loaf.[1]

Potato Bread is a bread that supplements wheat with potato, in order to stretch out the supply of flour in Skyrim as wheat is high in demand. 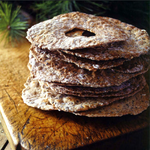 Rye Crisps are thin and flavorful seedy rye crackers that are perfect with a little cream cheese and smoked fish. They are often eaten by fishermen.

Apple Cobbler is made from the apples of Skyrim's orchards.

Apple Pie is a type of pie made from apples.

Birch Cookies honor birch trees and their enterprising spirit with miniature versions of the birch logs that burn in many a hearthfire, keeping residents warm and snug.

Boiled Creme Treats are quite popular in Skyrim. The fluffy sweet dough around a creamy custard filling makes for a substantial little dessert.

Honeycomb is a rare treat for Nords.

Honeycomb Brittle is a type of confection that looks like a honeycomb, it is light and crispy, with toasted honey flavors.

As tart apples are a staple in Skyrim, they can easily be made into Honey-Dipped Apples, with the apples being served either roasted or raw, then iced with a drizzle of sweet milk and honey. They are described as sticky, messy, sweet, and tart.[2]

Honey Nut Treats are a type of honey-covered, nut-studded dough that are commonly skewered on a stick. They are often eaten alongside mead.[2]

Jazbay Crostata is a type of tart that is strictly a delicacy best enjoyed after a heartier meal. The primary ingredient is Jazbay, with the dark, sweet juice of the grapes sinking into the dough to create a deliciously moist base, though it's sturdy enough to not be soggy. It is considered too sweet to some.[2]

Long Taffy Treat is a confection that was so closely guarded that it was impossible for the average Nord to make and could only be obtained by nefarious means up until 4E 201. A careless Whiterun guard let slip the secret after one too many ales, so now it is enjoyed much more widely.

Oatmeal Raisin Shortbread is eaten across Skyrim and is sweet and buttery, these little iced shortbreads are a perfect pick-me-up in the morning or in the afternoon.

Snowberry Crostata is a type of tart that is simpler than a pie and yet no less delectable. On their own, snowberries are so tart as to be quite unpalatable and so this pastry perfectly marries the tartness of the berry with the sweetness of the bread to create a truly memorable experience. Nords often eat this crostata after a meal as a treat, or early in the morning before a day's work.[2]

Spiced Root Cake is a cake that uses carrots and parsnips, it goes well with canis root tea.

Skyrim's cold clime may make farming difficult,[citation needed] but Nords aren't without their fair share of greens. Though they are not vegetables, round, white mushrooms are often served alone in bowls or accompanying larger meals.[3]

Grilled Leeks can often be spied gracing the tables of the rich and poor alike across Skyrim.

Potato Porridge is a type of porridge made from potatoes that is known to be eaten by Nord Warriors.[4]

The cold waters of Skyrim provide a bountiful source of seafood for the hardy Nords. They also keep cows, pigs and chickens for their meat. Fish are often preserved by drying them in the cold air and wind on wooden racks.[5] The fish are not salted before they are dried. The result is stockfish, which can be eaten alone[6] or served alongside other fare, such as mushrooms and bread.[7]

The Nords sometimes smoke their meats; sausage is a prime example.[8] Sausage, eggs and ham are common breakfast items in the western Holds. They can be plated in any combination of the three components;[9][10] a full meal can consist of all three.[11] Beef ribs are a delight from any Nord smoker, and are served by the rack.[12]

Meatloaf in Falkreath is commonly made with wild game, carrots and cheese.[13]leaving a note here for later - keep in Skyrim or move to Generic?

Baked White River Salmon is a dish utilizing the large numbers of salmon in the White River. Most simply bake the fish with some herbs which results in a delicious meal, but nobles often prefer it baked into a pastry case.

Skeevers can be cooked on a spit over an open flame to produce charred skeever meat.[14][15] The charred hide of spit-roasted skeevers can also be used as an alchemical ingredient. Skeevers aren't generally eaten in this manner by the public; rather, those living in the wilderness may be more inclined to kill and roast a wild skeever.[14]

Chicken Dumplings are a specialty of many inns across Skyrim, where travelers can enjoy them hot after a long day's journey, but they're also a popular pick in many personal Nord kitchens. In either case, the creamy filling has restorative properties.

Companions Meatball Bake is a simple dish that is popular among Whiterun's Companions, where it is always served in a round shape to symbolize their equality with one another. These meatballs might be made of whatever has been freshly caught, be it bear, venison, boar, or mammoth.

Eel is known to be eaten in Solitude.

Elk and Scuttle is a dish eaten on the island of Solstheim, it consists of elk meat and scuttle.[16]

Goatherd's Pie is a meat pie that uses goat meat as its primary ingredient.

Horker Loaf is a common dish for many coastal families. It's considered lucky to eat the roasted garlic "tusks" at the top of the loaf, and children will often compete with one another to get them.

Juniper Lamb Chops are lamb chops that use juniper berries, which commonly grow in the southwest of Skyrim.

Mammoth Steak is a type of steak made from mammoths. While much of the animal is tough and inedible, the loin is exquisitely tender. Cutting a slice from this impressive part of the beast yields a flank of meat that can be seared or broiled.[17]

Seared Nordic Barnacles are an uncommon dish due to the Nordic barnacles being relatively rare, which makes them a highly sought-after ingredient.

Patty Melt is a sandwich consisting of a ground beef patty with melted cheese and topped with caramelized onions between two slices of griddled bread.[18]

Nordic tradition requires the cook to sear the fish, once picked clean of bones, until the skin is blackened. Some prefer to cook the flesh slowly by wrapping the fish in cabbage leaves, searing the skin as the very last step before consumption.[17] It goes well with mammoth cheese.[19]

Tomatoes are not uncommon in vegetable soup, which can be simmered over the fire with a variety of greens, including onions and leeks.[20] Basic hearty meat stews may contain red[21] or white meat.[22] Mushrooms and whole fish can be scrounged up to make a simple stew while camping out in the wilderness.[23]

Apple Cabbage Stew is a richly flavored broth that is both nutritious and delicious, despite the limited ingredient list. For many Nords, this meal reminds them of their youth. Though, there is some debate over the method of cooking the stew, mainly in the use of the apples. A strict divide exists between those who believe in mashing, and those who believe in cutting.[17]

Imperials prefer a version of this dish that uses red cabbage, which they say is sweeter.

Braised Rib Stew with Farr is one of Skyrim's most rustic soups, made in the far-flung small villages and hunting camps that lie a long way from cities, where every bit of food is considered precious, with nothing wasted. The rib bones at the bottom of the pot give the broth extra nutrients that are essential for surviving long spells of frigid temperatures.

Coastal Clam Chowder is a Nordic chowder. Nordic barnacles, clams, oysters, mudcrabs, and a variety of fish are often included in this chowder, depending on the catch of the day. It is a popular staple in coastal cities such as Solitude and Winterhold.

Horker Soup is made from the meat of horkers and is uncomplicated, wonderfully salty, and has a thin broth. It's best served with a warm loaf of bread to sop up the last dredges.[17]

Pea Soup is a hearty Nordic soup, and is a popular option in the depths of winter, when fresh greens are the hardest to come by, but it still incorporates some of Skyrim's most popular ingredients as it uses dried peas and cured bacon, along with carefully stored leeks and carrots. The result is a simple but filling staple that sticks to the ribs.

Potato Cheddar Soup is a staple at every farmstead and crofter's village across Skyrim. Simple but hearty, it gives a bone-deep warmth that better prepares anyone for the day's labors ahead, be they adventuring, tending a shop, or working the fields.

Salmon-Millet Soup is a soup made from salmon, tomatoes and millet. It is known to be eaten in Solitude.[24]

Sun's Dusk Chowder is a chowder that originates from Dawnstar.[25]