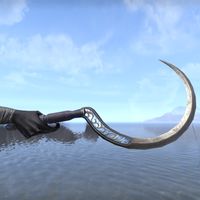 The Moonlight Blade in pristine condition

The Moonlight Blade is a crescent moon-shaped blade associated with both Azurah and the extant Order of the Hidden Moon. This ancient Khajiiti order was said to have been gifted the blade by the Mother Goddess herself,[1] whom plucked the blade off her own Moon-Staff to be used as a weapon.[2] The order were charged to guide, protect and redeem their people's souls—both pure and those corrupted by Namiira, the Moonlight Blade was considered sacred tool for this duty.[3] While on its own the blade was a deadly weapon against the Dro-m'Athra, in the hands of those who knew the Order's secrets, the Moonlight Blade could cut through liminal barriers, both the mundane and those between worlds. In particular, the ushering souls to their fated afterlife, this power came from the second nature of the Moonlight Blade, as it functioned as a gateway to the Crossing, a transitional realm between Nirn and Sands Behind the Stars.[4]

Within the Order of the Hidden Moon, a guardian was selected to wield the Moonlight Blade from the adepts, this position required someone with an iron will and conviction. The Blade was passed from guardian to guardian without incident until sometime in the First Era, when the warrior Shando-ri became its wielder. His friend and rival, Arum-Khal had slowly become dissatisfied with the Order's actions and Shando-ri being chosen over him was the last straw. Arum-Khal renounced Azurah and the Order, with many adepts following him, leading to a bloody civil war within the temple.[3] At the end of these battles, the now-lich Arum-Khal had become far too powerful for the survivors to end him permanently and he was instead sealed within the crypts. In preparation for the Dro-m'Athra Lich's return, Shando-ri underwent a six month ritual to transfer his soul and spirit to the Moonlight Blade, to remain on Nirn until he could slay the Dark Adept.[1] Many of the surviving adepts sacrificed themselves to further empower the Moonlight Blade, though none were left to wield it in the end.[3]

For centuries, the blade remained within the Moon Guardian's Tomb undisturbed. It was not until the sixth century in the Second Era, when Arum-Khal and the nearby dead were awakened by an unwitting necromancer[5] that the Moonlight Blade was brought to light once more. Through the efforts of the High Elf necromancer, Vastarie and a wandering adventurer to stop the undead threat from the Ashen Scar, the remaining spirits of the Hidden Moon were roused and the adventurer became the next wielder the Moonlight Blade, in a bid to permanently end Arum-Khal with the help of Shando-ri.[6] Although it took slaying Arum-Khal's spirit within his own realm to end him at the cost of Shando-ri, it is said that the redeeming powers of the Moonlight Blade allowed Vastarie to send the soul remnants of both Arum-Khal and Shando-ri to the afterlife.[7]

Afterwards, it is reported that the Moonlight Blade remained in the possession of the adventurer, with the blessing of the Clan Mother of the Hidden Moon to wield in Azurah's name.[4][3]