Llevule Andrano was a Dark Elf priest who lived in the mid-Second Era. He played an important role in thwarting Clavicus Vile's plot to drain Vivec's divine energy, and once the crisis was over, he replaced Tarvus as the Archcanon of the Tribunal Temple.

Around 2E 582, Barbas invented a plot to get his master Clavicus Vile into Sotha Sil's Clockwork City. The Nycotic Cult, who worshipped a twisted form of Vile, performed a ritual to summon Sunna'rah, a staff created by Sotha Sil that could drain the divine energy from the Tribunes.

However, just after the cultists succeeded in summoning Sunna'rah, it was stolen by the Red Exile Ashlanders working for the Urshilaku ashkhan Conoon Chodala. They brought the staff to Chodala, who begun to use it to drain Vivec's power and make himself invincible.[1]

Eventually Vivec noticed his power fading away and sent Llevule, then a Tribunal Temple canon and an aide to Archcanon Tarvus,[2] to the Andrano Ancestral Tomb to ask his ancestor Farena some cryptic questions regarding the current threat. However, Llevule and his party were driven out of the tomb by a group of Skaafin, a type of Daedra serving Clavicus Vile. During their retreat, Canon Llevule met the Vestige, who agreed to clear the tomb and helped Llevule accomplish his mission.[1]

When Llevule and the Vestige returned to Vivec, the Warrior-Poet convinced the Vestige to investigate what was happening to his divine powers, while Llevule stayed at Vivec's side as the god was growing weaker and weaker. Unbeknownst to everyone, Archcanon Tarvus, who was aiding the Vestige with the investigation, had been secretly replaced by Barbas after he had died in his sleep. After the Vestige finally retrieved Sunna'rah from Chodala, Barbas tricked them into using the staff on Vivec, which drained most of his remaining energy, caused the Red Mountain to erupt, and almost made Baar Dau fall from the sky.[1] 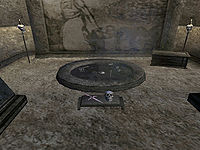 Barbas subsequently went to the Clockwork City to prepare for Vile's arrival, but the Vestige and the wizard Barilzar followed and stopped him, then returned the stolen energy to Vivec. With the threat over, Llevule was named the new Archcanon of the Tribunal Temple.[1]

Eventually, Archcanon Llevule died, and his skull was laid to rest in the Andrano Ancestral Tomb. In 3E 427, Sharn gra-Muzgob of the Balmora Mages Guild sent the Nerevarine to retrieve the skull for her in exchange for information required by the Grand Spymaster of the Blades Caius Cosades, who the Nerevarine worked for. Sharn told the Nerevarine that Llevule Andrano was "no one special, a journeyman enchanter".[3] However, she was secretly a necromancer, so it's possible she didn't want anyone to learn that the skull she was going to use in her rituals belonged to a Temple archcanon. Regardless, the Nerevarine delivered the skull to her, and in return, she gave him her notes about the Nerevarine cult.[4]