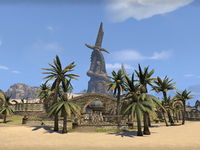 Leki's Blade is an outpost in the Alik'r Desert, built in the First Era around a shrine to the eponymous Saint of the Spirit Sword. The large statue of an upraised blade gives the town its name, and serves as a landmark for travelers making their pilgrimage to the venerated site.[1] A prestigious temple, said to have been founded by the last of the Ansei, instructs students in the ways of the sword, as well as the mind.[2]

Redguards of all ages and skill seek tutelage there, under the watchful gaze of their sword-singer ancestors.[1] Admission into the school is strict, and students are not allowed to even hold a sword until they learn about its history.[3] Said to be the swordsmen's most holy site, only those who have endured a proving can learn from masters.[4][5]

According to legend, the school was founded on the very place of one of Leki's miracles during the times of the Ansei. Leki was known for teaching new ways of wielding the blade. This attracted a great warrior called Rada al-Saran to the oasis. A proud man, he claimed to match the gods in the way of the sword. Some say that Leki herself drew him to the school to challenge and humble him. When he arrived, he found Leki had taken the shape of a warrior of sand, wielding a blade of the hardest rock. Rada al-Saran bowed to his opponent, and when it bowed back, he knew found an opponent worthy of his skill.[6]

For three days and three nights they dueled with neither gaining the upper hand. Rada al-Saran was becoming tired from fighting, so in a last ditch attempt he struck the weak point of Leki's sword. The blade broke in two, and a great sandstorm split the horizon. When it cleared, Leki had erected a shrine from the sands and the surrounding oasis was said to have held the purest water in all Alik'r.[6]

Among the various masters at the school throughout history, Master Ahram Sesnit is perhaps remembered best. He was known for teaching countless students in his tireless quest to perfect the blade and became revered among students and teachers alike.[7] Around 2E 482, he had grown old and was approaching death. As a mercy, his favorite student asked him to retrieve her stolen blade so that he had the chance to die in glorious battle.[8] Master Ahram left Leki's Blade, but the legends never spoke of his death.[3]

In 2E 582 the school was experiencing various hardships. Despite attempts at recruitment, their numbers were dwindling and the selection process had become relaxed.[9] The Vestige visited Leki's Blade and agreed to help the school. After passing the initiation rituals, they discovered that Master Ahram Sesnit was still alive, but had turned into a vampire. He lived in secret beneath the monument dedicated to him, turned Master Fadalia into his thrall and used her to bring him more and more students to feed upon. Master Fadalia's reverence to the memory of Master Ahram was such that she could not raise her blade against him. The Vestige sought out and killed Master Ahram in his crypt, putting an end to his scheme. Master Fadalia was put on trial for her actions. While some called for her death and others pleaded her to be spared, what became of her is lost to history.[10]