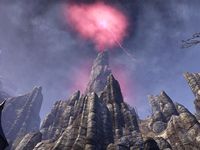 The Doomcrag Spire in the Kurallians

Gyron Vardengroet, otherwise known as the Sage, had initially traveled through the foothills to reach Shornhelm, where he went under the tutelage of the Mages Guild Guildmaster, Morkledder. When his training was ultimately complete from the Council of Wizards at the Crystal Tower, the Sage retired deep into the Kurallian Mountains, where he built a magical fortress where only those deemed worthy would enter.[2] Ever since then, monuments of the Sage had existed all throughout the Iliac Bay, from as far as Daggerfall and the Dragontail Mountains.[3]