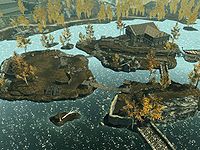 The Isle of Gold[1] is a group of small islands located in the center of Lake Honrich in the Rift region of Skyrim. The islands are interlinked with bridges and are similarly connected to the mainland via a bridge from the south shore of the lake.

In the mid-Second Era, the islands housed an estate known as Skald's Retreat, home to the most renowned bards in the Kingdom of Eastern Skyrim. As a young prince, the future King Jorunn studied on the Isle of Gold and became known as the Skald Prince.[1] Circa 2E 582, a cult of Vaermina worshippers known as the Supernal Dreamers attacked Skald's Retreat and attempted to merge the islands with the realm of Quagmire, causing the sky to turn purple and the estate to become infested with nightmarish monsters. The majority of the bards became trapped in the distorted nightmare reality which was created, but with the aid of the Vestige the still-conscious bards were able to perform a rendition of The Song Of Sinmur and awaken their slumbering colleagues.[2] The cultists also attempted to scatter tomes on Vaermina contained in the skalds' library, but the resident loremaster succeeded in having the books returned.[3]

Circa 4E 201, the Isle of Gold was home to a honey farm known as Goldenglow Estate, owned by an elf named Aringoth. The estate consisted of a large manor, docks, a sewer system, and a large apiary. Goldenglow was responsible for providing honey to the Black-Briar Meadery in Riften, which was run by Maven Black-Briar, an ally of the Thieves Guild.[4] A Nightingale named Karliah secretly purchased the property from Aringoth in 4E 201 and instructed him to cease all dealings with the Thieves Guild.[5] Fearing retaliation, Aringoth hired a small army of mercenaries and heavily fortified the islands. The Thieves Guild subsequently infiltrated the estate, looted the place,[6] discovered the bill of sale, and burned a number of beehives in order to send a message to the whole of Riften that Maven Black-Briar should not be crossed.[7]