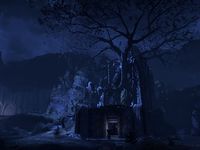 Hectahame (translated as "Home of the Exiles" in Ayleidoon[1] and also called the Heart of Valenwood)[2] is a large and expansive ayleid ruin found in the evergreen jungles of Greenshade, in the province of Valenwood. Built deep in the vales of Green's Marrow, it contains the Heart of the Valenwood, an ancient tree that represents the physical embodiment of the forest's soul and lifeblood. To the local Wood Elves, they view these ruins with superstition and awe, both fearing the past and venerating the Heart for the life energy it emanates.[2] It was built by the Ayleids, possibly for those that lived in the White-Gold Tower.[1]

The Ayleid settlement of Hectahame was built by the refugees of the Alessian Slave Rebellion, which toppled the Ayleid Empire in 1E 243 and drove the elves out of Cyrodiil. Its name is a sentiment to its inception. It is believed by scholars that Hectahame was built for the nobility that resided in the White-Gold Tower, but it is unknown whether that was the actual case.[1]

The tree known as the Heart of Valenwood is more of representation of the forest's soul, rather than the literal heart. But regardless, the ruins emit a strong and powerful energy that many people have tried to take control of, even back when the Ayleids still lived in the province. In the early years of Ayleid occupation in Valenwood (or in the years after Ayleid extinction),[3] a necromancer, whose name is long forgotten and cursed, invaded the region with an army of undead and manipulated the heart's energy to raise resurrected Ayleid warriors. Even after a long and grueling battle, the city was unable to defeat the powerful army and were forced to seal Hectahame with a strong ward from their welkynd stone. The city was turned into a prison and eventually, the undead returned to the ground as the magic dissipated. Despite this, no one was able to break down the barrier and ever since then, Hectahame has been left to rot.[2]

Like many other Ayleid cities in Valenwood, it did not last no longer than two-thousand years after the Ayleid Diaspora after the slave rebellion.[4] It is speculated that the only people that could enter the ruins is with an object that could cancel out the magic that makes up the barrier. One of the last known people to enter the ruins was an unnamed Silvenar in the Second Era, who was known for his madness by his contemporaries.[2]

In 2E 582, the undead Shade of Naemon took refuge in the ruins of Hectahame and with the Staff of Magnus, created an army of undead warriors and feral soldiers to corrupt the province and finish creating an evil realm known as the Shadow Wood. The Aldmeri Dominion's greatest fighters stood on guard at the outskirts of the ruins, looking for any strategy to infiltrate Hectahame without turning into feral ghouls. The Bosmeri cleric, Indaenir and an agent of the Dominion bypassed the ruins by entering through the Shadow Wood and embracing nature's feral side. Once they reached inside, the two placed keystones in the center of the ruins and entered the Valenheart, Hectahame's inner sanctum that holds the Heart of Valenwood. In an epic battle, the two defeated the Shade of Naemon, but the Heart was still too corrupt. In a last ditch effort, Indaenir sacrificed himself and restored the Heart of Valenwood, at the cost of his life. It was at that moment, Y'ffre took pity on the elf, brought him back to life and named him the new Silvenar.[5]