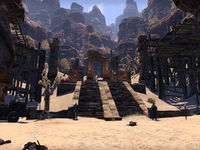 The Hall of Heroes is a Redguard temple and crypt, which houses the bodies of such great heroes as Frandar Hunding, Divad Hunding, and Makela Leki.[1] By the middle of the Second Era, no more heroes were being interred there, as it was considered too sacred of a location for even the greatest heroes of the age.[1] However, the most notable feature of the hall is not the crypt, but the Chamber of Passage, which contains the portal through which the souls of Redguard heroes pass in order to reach the Far Shores.[1][2] Mortals are usually denied access to the Hall for that reason, with the exception of the temple's Keeper, who is able to enter the Chamber of Passage and communicate with souls who have passed on.[1]

So far, very little is known about the history of the Hall of Heroes, except that it appears to have been constructed by the Redguards around the time of Frandar Hunding's death. In particular, no one knows how it came to contain one of the very few known portals from Nirn to Aetherius.

In 2E 582, Septima Tharn, a necromancer and Magus-General of the Imperial Seventh Legion, slew High King Emeric of the Daggerfall Covenant in the Chamber of Passage, and was able to physically follow his soul to the Far Shores. A soldier of the Covenant was able to follow and slay Tharn in turn; due to this heroic deed, Tu'whacca allowed the soldier and King Emeric to return to life in Mundus.[1]