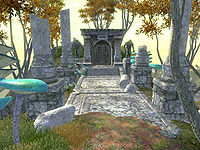 Fain at the end of the Third Era

Fain is a ruin in the Shivering Isles, located on one of the peaks of the Jester's Spine Mountains. The ruins were once home to a group of Heretics who worshipped an unholy being known as Gyub.[1] The Heretics sacrificed "volunteers" to Gyub by dangling them over the Pit of Fain (a root tunnel which drops vertically down the center of the mountain), reciting a prayer to Gyub, and dropping the sacrifice into the Pit, never to be seen again.[1] There is no evidence of Gyub's existence; the sacrifices were likely eaten by the many beasts which lived in the root caves at the bottom of the Pit. In 3E 433, the Heretics here were preparing for an obscure ceremony that they called the "Rebirth", for which they needed a large amount of "volunteers" to be sacrificed.[2] The ruins were cleared out later that year by Sheogorath's Champion.[3]