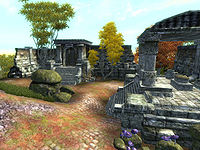 Ebrocca at the end of the Third Era

Ebrocca was one of the youngest ruins in the Shivering Isles at the end of the Third Era, when it was almost 1,000 years old.[1] It was located near the settlement of Highcross. The ruins were purged of undead in 3E 433 by Sheogorath's Champion.

Ardwe Malifant, the clanfather of a Bosmer family, built it as a final resting place for his deceased mother. However, his mother's death drove him into insanity and he built it in the Shivering Isles instead of Skyrim, where his family had expected it. The site was built to last, with numerous security systems and magics to revive the caretaker put in place. Ardwe systematically killed off all of his relatives to fill the tomb.[2] Clanfather Malifant finally fell to Sheogorath's Champion in 3E 433, despite the resurrection enchantments which protected him from death.