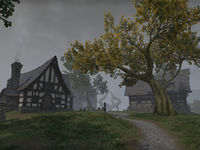 Eagle's Brook (also called Eagle Brook)[1] is a village located on the coastal highlands of Glenumbra, in the province of High Rock. Eagle's Brook is the home of nearby Camlorn's artisans and craftsmen who serve the high nobility of the kingdom. The settlement also serves as a key port to the city-state, one that bridges it to the Eltheric Ocean from the north. And because it is a port town, Eagle's Brook sees a regular import of seafood and prepares it daily.[2]

Eagle's Brook was taken over by the Bloodthorn Cult led by Lord Velian in 2E 582, and they would sacrifice people on the docks, turning them into zombie thralls. They would then transport these zombies to other areas across the region, such as Daggerfall and Cath Bedraud, to reinforce their numbers against the Lion Guard and Daggerfall Covenant.[3] Dame Clarique led the Lion Guard militia against the cult in Eagle's Brook and apprehended a former bandit of the Red Rooks clan and former resident of Eagle's Brook, Tamien Sellan. The former bandit wanted to help his hometown by employing a spell created by his father called Merien's White Mask and hiding the villagers with it. With the help of an Agent of the Covenant, the spell was unleashed and after the ritual, the Agent managed to speak with Tamien's father, Merien Sellan, who was stuck in a pocket realm of Oblivion.[4]

The Bloodthorn and Lord Velian's sacrifices created a pocket realm of Oblivion, a replica of Eagle's Brook where Velian conducted his invasion. Merien infiltrated the plane, hoping to disrupt his plans from within all the while sacrificing himself. Tamien wanted to save the village without losing his father, while Merien wanted the Agent to defeat the Bloodthorn Cult before they left Eagle's Brook. It is unknown which course of action the Agent went with, but Eagle's Brook was saved and Tamien Sellan left Glenumbra for good.[5]

During the Imperial Simulacrum in the late Third Era, the village of Eagle Brook was an active settlement. It was ruled by Lord Theodyn and had a rivalry with Moonguard.[1] Eagle Brook was neighbored by several settlements, including Kings Guard to the south and Meir Darguard to the northeast.[6]