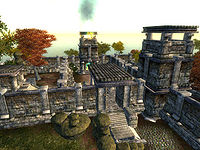 Cylarne at the end of the Third Era

Cylarne was a ruin in the Shivering Isles at the end of the Third Era, located on the Isle of Flame. It is the oldest known ruin in the Isles,[1] and is rumored to be the original capital of the Shivering Isles.[2] The ruins of Cylarne are home to the Cold Flame of Agnon, which is fed by the altars of Rapture and Despair.[3] The Dark Seducers and Golden Saints constantly fought over controlling the ruin.[3]

In 3E 433, Sheogorath's Champion was sent to Cylarne to relight the Great Torch in New Sheoth, which was extinguished by the coming Greymarch. The Champion put an end to the conflict by manipulating a planned attack from the Saints, and brought the holy Flame back to New Sheoth.[3]