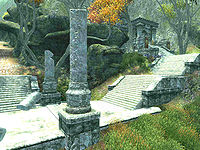 Brellach at the end of the Third Era

Brellach is the home of the Aureal in the Shivering Isles, located in the north of Mania on the Saints Watch peninsula. It is the most sacred place to the Golden Saints, as it contains the Wellspring of the Aureal. The souls of fallen Aureals are called back to the Isles from the Waters of Oblivion to the Font of Rebirth by use of ceremonial chimes.[1] The stronghold was given to the Aureal by Lord Sheogorath and no mortals are usually permitted to pass inside the sacred halls.[1]

In 3E 433, Brellach was invaded by order. According to the Aureals who survived the attack, the Forces of Order were let inside the halls by Thadon, the former Duke of Mania who had become a Priest of Order to aid Jyggalag in the coming Greymarch,[2] although this conflicts with reports of his assassination.[2] The results of this attack were catastrophic. The armies of the realm were greatly crippled, and the Font of Rebirth was covered with Order Crystals, drying up its waters and turning the Aureal to stone.[2] Sheogorath's Champion, who had been granted access to Brellach to fight the Knights of Order, destroyed the crystals surrounding the Wellspring and restored the Aureal, who subsequently defeated the remaining Forces of Order.[2]