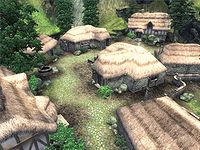 Bleaker's Way is a settlement found north of the Imperial City, in the Great Forest of Cyrodiil.

In the Second Era, a settlement was founded here by a Nord named Ulf the Bleaker. Soon after, a Dunmer named Rayno Dalvilu and his family arrived. While relations were initially cordial, the two families soon came into conflict. As tensions came to a head the majority of the village was evacuated, leaving Rayno, Ulf, and two of Ulf's clanmates. As the remaining Bleakers stood their ground, Rayno—who had locked himself in his home—cast a spell to obliterate the trio. While the spell was successful in killing the Bleakers, Rayno was also killed in the ensuing chaos, and the hamlet was left deserted.[1][2]

During the Alliance War of 2E 582, a small fort called Bleaker's Outpost was located just south of the settlement. It was initially held by the Daggerfall Covenant, although the outpost changed hands many times over the course of the war. Its strategic position was critical to maintain supply lines. The ruins of the village were inhabited by a group of giants at the time.[3]

Sometime after the Alliance War, both the Bleakers (now called the Ulfgars) and the Dalvilus returned to Bleaker's Way. In spite of their earlier issues, the two families lived in peace for centuries, but their harmony eventually drew the attention of Mephala. In 3E 433, she ordered the Champion of Cyrodiil to assassinate the village leaders, Hrol Ulfgar and Nivan Dalvilu, and frame the other families for the murder. When the villagers learned of their neighbors' supposed treachery, history repeated itself and they fought amongst themselves, decimating the population until only one family remained and pleasing Mephala with their strife.[4]