The UESPWiki – Your source for The Elder Scrolls since 1995
< Lore: Places: G(Redirected from Lore:Blackmoor)
Jump to: navigation, search 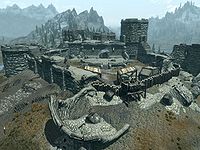 Greymoor also called Black Moor[1] or Darkmoor,[nb 1] is a settlement that dominates the center of the Tundra plains of Whiterun Hold, immediately west of the Skyrim city of Whiterun. Fort Greymoor (originally called Black Moor Keep)[2] guards the strategic crossroad which connects Whiterun with the Reach, Hjaalmarch, and Haafingar.[3] The subregion around the Keep is referred to as the Greymoor Foothills (or Western Plains),[4] and the peak of Lone Mountain can be found to the west of the imposing fortress.[5]:545

Black Moor Keep was in existence since at least 2E 577, when it was occupied by Arkasis the Mad Alchemist while he experimented on the citizens of Whiterun, transforming them into werewolves using alchemical concoctions. When his actions were discovered, Arkasis was chased back to the keep by an angry mob and was forced to flee the hold. These events later went on to be dramatized and reimagined in an Investigator Vale novel known as The Hounds of Black Moor.[2]

In the early years of the Third Era, Darkmoor was ruled by Count Sven Advensen and his wife. Emperor Tiber Septim granted Sven this title and fiefdom upon his retirement from the Imperial Legion.[6] The previous rulers there had been distant cousins to the new Count and his wife, Lady Inga.[7] The couple famously became the guardians of Princess Barenziah, and the future Queen of Morrowind was raised in the small Skyrim village, unaware of her birthright.[6]

During the Imperial Simulacrum in the late Third Era, the village of Black Moor was an active settlement, being ruled by Lord Torben. It had a rivalry with North Keep.[1] It was neighbored by several settlements, including Riverwood to the southeast, and Whiterun to the east.[8]

By 4E 201, the ruins of Fort Greymoor had been ravaged by war, and collapsed parts of the stone walls were fortified with wooden barricades. The occupants changed regularly, with Orcs, vampires and bandits all having occupied the ruins.[9] During the Stormcloak Rebellion, the fort served as a point of contention between the Imperial Legion and the Stormcloaks, with both sides struggling for control.[3] The Staff of Hasedoki was smuggled into Skyrim the same year,[10] and the Gilgar family dispatched Modig Gilgar to recover the staff, who was ambushed by smugglers intending to rob him at the road next to Fort Greymoor. He quickly dispatched them, with the Last Dragonborn arriving to the scene shortly after, being attacked by a wary Modig, whom they killed.[11]