The Battle of Vivec's Antlers of 2E 572 was the decisive military confrontation of the Second Akaviri Invasion (known as the Liberation War among Argonians). An unprecedented coalition of Nord and Dunmer troops, later reinforced by the unexpected intervention of free Argonians, managed to defeat the fierce army of Kamal snow demons on the beach of the Inner Sea just west of Ebonheart, later known as Vivec's Antlers. In the aftermath, the victorious Nords, Dunmer and Argonians formed the Ebonheart Pact, an unlikely multiracial alliance that instantly became one of the great powers in Tamriel. It also led to a large-scale (but not complete) abolition of slavery among members of the Pact, especially for Argonians in recognition of their crucial aid during the battle. 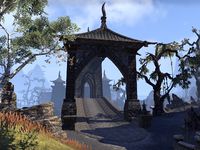 Further information: Second Era Wars § Second Akaviri Invasion
Contemporaries wondered why the Akaviri invaded and what they were after; their objectives and troop movements were difficult to explain.[1] Reportedly, their King Ada'Soom Dir-Kamal was searching for the "Ordained Receptacle", but whether this term was correctly translated from Akaviri remains uncertain, much less what it even meant.[2] Very little is known about the Kamali language and culture in general;[2] Tamrielic sources of the time referred to the snow demons as 'Snakes'[1] or 'Snake-Men'.[3]

After the Nords suffered a devastating defeat at the hands of the Akaviri invaders in the Battle of Windhelm (7 Sun's Height – 7 Last Seed 2E 572),[4] Jorunn the Skald-Prince of Eastern Skyrim allegedly sought the aid of the reclusive Greybeards, who summoned the mythical Ash-King, Wulfharth.[5][2] With the aid of the so-called Wulfharth, Jorunn rallied his Nordic troops and fortified Riften, expecting an imminent assault.[2] However, the invaders simply bypassed the city, passing into Stonefalls in western Morrowind.[2] Their next target may have been Mournhold.[6]

Entering Morrowind, the Akaviri invaders were opposed by Dark Elf forces commanded by general Tanval of House Indoril, who staged a fighting retreat as the Akaviri slowly advanced towards eastern Stonefalls.[2] A battle took place between Riften and Fort Virak, where the outnumbered defenders held out for some time against the Akaviri before the latter broke through, and afterwards also captured Fort Virak.[1]

The battle had begun between the Akaviri, led by Ada'Soom Dir-Kamal, and the Dark Elves under the command of Almalexia and her leading general, Grandmaster Tanval Indoril. On a beach of the Inner Sea just to the west of Ebonheart that would later be named Vivec's Antlers,[9] Dunmeri troops managed to halt the invaders, and engaged them at their prepared defenses.[2] Meanwhile Jorunn and the so-called Wulfharth (and reportedly the Stormfirst Brigade[7]) pursued the Akaviri force into a surprise pincer attack.[2] As the Nords under Jorunn and Wulfharth landed and fell upon the Akaviri rear, the tide of battle turned. The fighting was fierce, but the Nord army was overextended, the Kamali lines remained intact as they retreated to the Inner Sea, where they desperately tried to hold out for evacuation.[2] 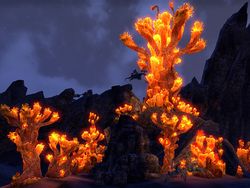 The battle hung in the balance until an Argonian phalanx of Shellbacks unexpectedly reinforced the Dunmeri army, turning a stalemate into a slaughter.[10] Sources disagree on how many groups of Argonians intervened, and who their commanders were. Self-liberated slave Heita-Meen recounted that, after receiving a vision from a Hist tree that she had to save the Dunmer and Nords from certain death, she took control of the Archein Guard in Thornmarsh and joined up with the Shellbacks of Walks-in-Ash in Stormhold.[8] She then allowed any Saxhleel who objected to rescuing the endangered Dark Elves to return home, marched to Stonefalls with a still strong force and entered the fray.[8] A Western Skyrim historian confirms 'two legions of Argonians' entering the battle from the south at the last moment;[2] however, Jorunn's biographer mentions 'a phalanx of Argonian shellbacks, led by a trio of reptilian battlemages',[5] suggesting a third leader. Biographer Mee-See stated that Keshu the Black Fin's Legion played an important part in driving back the Akaviri invaders in general, and that Keshu took part in the formation of the Pact in Ebonheart on the next day, but is vague about whether the Black Fin Legion participated in the Battle of Vivec's Antlers.[6]

At first, the Dark Elves were alarmed to see a force of armed Argonians heading towards them.[1] According to rumors, some initially even turned their weapons on the Shellbacks, either because they feared the ex-slaves wanted to take revenge,[8] or because they felt too proud to be rescued by Argonians.[1] The Dunmer were shocked when the free Argonians actually joined their ranks.[8] A Nord soldier, whose father was present, wrote: 'No one expected this. I still cannot believe it. The Dunmer once held the Argonians as slaves, yet on that day, the Argonians' arrival changed the course of history. From the jungles they came, adorned with blood and mud. Akaviri fell beneath their claws, as well as the swords and spells of their Nord and Dunmeri allies.'[10]

Finally, the combined Tamrielic forces broke the Akaviri line and defeated the invaders.[2] There is no agreement in sources on the exact outcome: either the Akaviri were slaughtered until there were none left because their fleet (already visible on the horizon) arrived too late to evacuate them,[2] or they were driven into the sea and drowned by the thousands,[5] or the remaining Akaviri were forced to flee.[8] According to the Pocket Guide to the Empire, 1st Edition (published 2E 864), centuries later, remnants of the Kamal invasion force who had somehow survived the battle resurfaced some time before 2E 812 in Cyrodiil, briefly seizing the Ruby Throne before being defeated again.[11]

Some later Dunmeri sources claim that, at some point during the battle, Lord Vivec assisted by drowning (some of) the Akaviri at Vivec's Antlers. This narrative referenced in later Dunmeri culture,[12] but contemporary sources do not mention Vivec's interference, nor a flood.[nb 1] Nevertheless, within a decade, the previously unnamed beach with its coral maze where the battle took place had become known as 'Vivec's Antlers' among the Dunmer, as some had come to believe that Vivec had saved them during the Akaviri invasion, and the corals were Vivec's gift to the Dark Elves.[13][nb 2]

Further information: Argonian § The Akaviri Invasion and the Formation of the Ebonheart Pact

Formation of the Ebonheart Pact[edit]

Ebonheart in 2E 582. The Pact was formed here after the Battle of Vivec's Antlers.

The conflict united three races who had held great animosity towards each other for centuries, leading to the formation of the Ebonheart Pact.[10] As a show of thanks for the Argonians' timely intervention, the Dunmer formally ended the enslavement of Lizard Folk. The practice of slavery itself did not end, despite the Argonians' liberation.[15] The most detailed account of the Pact's formation is recorded by Mee-See, aide and biographer of Keshu the Black Fin, an Argonian anti-slavery freedom fighter and friend of Jorunn's who had joined the war at his request:[16]

When the fighting finally ended near the city of Ebonheart and victory was ours, Keshu hurried to meet with the leaders of the other two factions. I, as her loyal squire, followed in her wake. (...) Jorunn stepped forward and greeted Keshu like an old friend. "We owe you a great debt, Black Fin," Jorunn said in his loud, booming voice. "What can the Nords and the Dark Elves offer you for your invaluable assistance this day?"

Keshu was silent for a few long moments, looking intently at Jorunn first, and then turning her attention to Almalexia. With her eyes locked upon the Mother of Morrowind, she finally replied, "No more Argonian slaves. Set my people free."

Almalexia and Jorunn exchanged a look of their own, and the large Nord's gaze never wavered. After a time, the Dark Elf leader made a slight nod of her head and said, "A reasonable request. And one the Dark Elves shall honor—with one provision. The Argonians must join the Dark Elves and the Nords in a mutual pact of cooperation and defense. In that way, all three of our nations will remain free."

Thus began a series of negotiations that lasted well into the next day and ended with the formation of the Ebonheart Pact.
— Mee-See[6]

Shortly after its formation, the Pact widely distributed a pamphlet, proudly announcing: 'By Order of the alliance herein referred to as the Ebonheart Pact, and with the agreement of the ruling bodies of Skyrim, Morrowind, and Black Marsh, let it be known now and forever that slavery has been abolished in all Pact territories and principalities.' However, it stated that only the Houses Indoril, Hlaalu, and Redoran had agreed to the stipulation that all members of all races were now free and independent citizens, and that 'Citizenship and freedom are not guaranteed in other Dark Elf territories.'[17][UOL 1]

In order to hold the Pact together against all odds, the three races represented in the Great Moot were required to operate with mutual respect and amazing will, and to mollify the pride of the Nords and the Dark Elves while addressing the injuries suffered by the once-enslaved Argonians.[15]

As Jorunn the Skald-Prince returned home to Windhelm, a succession dispute arose between him and his twin-brother Fildgor Strong-Prince, who had jointly defeated the Akaviri invaders after the Sack of Windhelm in which their elder sister Queen Nurnhilde fell.[22][7] The brothers disagreed on who should succeed their sister and how to rule the land going forward, leading Jorunn to challenge Fildgor to single combat.[22][7] This long and fierce duel, known as the Brothers' War, was won by Jorunn, who exiled Fildgor and was crowned the Skald-King of Eastern Skyrim,[22][7] three weeks after the Battle of Vivec's Antlers.[5]