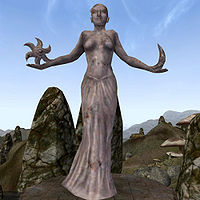 The Shrine of Azura 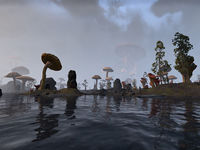 The Azura's Coast region consisted mainly of the numerous islands to the south and east of Vvardenfell. It included all of the southern islands east of the Daedric ruin of Ald Sotha, extended north to include the islands up the eastern coast and Zafirbel Bay, and three small peninsulas on the southeastern corner of Vvardenfell where a Shrine of Azura could be found.

The area was fairly desolate, and most of the territory was claimed by House Telvanni. It included the towns and towers of Tel Mora, Tel Aruhn, Sadrith Mora, Tel Fyr, and Tel Branora. It was also home to numerous wizards, sorcerers, necromancers, and Ashlander Mabrigashes. Many of these were based in old Velothi remnants or caves, rather than wizard towers. By no means were all magic-workers in the area Telvanni, but the dominance of the Telvanni did mean that there was little objection to their activities.

As the area was dominated by the Telvanni, it was one of the least subject to the power of either the Empire or the Tribunal, though both had enclaves in the House capital, Sadrith Mora. Since Telvanni lords were usually over a thousand years old and very powerful, they tended to see the "gods" of the Tribunal as peers rather than supreme beings.

Although the area received regular rain, the rocky terrain limited the region's agriculture. However, there were Ashlander camps scattered throughout the region. The area was full of ancestral tombs, and there were several significant Daedric Shrines on the islands. Many bandits preyed on unwary travelers.