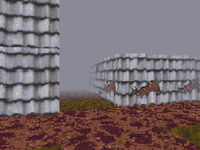 Archon during the Imperial Simulacrum

Archon is one of the eight-major cities in the province of Black Marsh,[1] being situated on the eastern coast on the Padomaic Ocean.

Archon is located on the southeast coast of the Padomaic Ocean, around marshlands. The sea surrounding Archon and nearby Lilmoth are riddled with countless pirates.[2] There is Guar that live in the general area. A coastal tribe of Argonians near Archon was able to breed the Glowgill Guar, which was supposedly able to breathe underwater.[3] Archon contains the training facility for the Shadowscales, Argonians born under The Shadow that would go on to serve the Dark Brotherhood and Sithis. The facility has since gone into disrepair.[4] Archon is neighbored by several settlements, including Portdun Mont to the northwest, and Seafalls to the north.[1]

Archon's founding is unknown. But before it was founded, the Barsaebic Ayleids, and other tribal elves like the Cantemiric Velothi, settled along the east coast, around both Archon and Thorn. But these cultures have since fallen into obscurity.[5]

During the Blackwater War in 1E 2833, the Imperial General, Lucinia Falco had taken over the Imperial Legion and begun the third campaign against the Argonian homeland. In the early years of the "Falco Doctrine," the General urged the Second Empire to temporarily recruit the pirates off the southeast coast, and so in conjunction with the Diamond Marines, the Empire was able to take control of the cities of Archon and Lilmoth. Lucinia's campaign across Argonia would result in the formation of the province of Black Marsh.[2]

During the Imperial Simulacrum in the late Third Era, the city-state of Archon was an active settlement, being ruled by King Herula. It had a rivalry with Lilmoth and Thorn.[6]