The UESPWiki – Your source for The Elder Scrolls since 1995
< Lore: Factions: A(Redirected from Lore:All-Flags Navy)
Jump to: navigation, search

The All Flags Navy (sometimes called the All Flags Fleet or the Lost Fleet [1]) was Tamriel's instrument of vengeance against the Sload of Thras, who were held responsible for releasing the Thrassian Plague in 1E 2200 which claimed more than half the continent's population. The All Flags Navy was formed under Baron-Admiral Bendu Olo, the Colovian King of Anvil, to deal justice upon them.[2] The Navy was composed of ships and sailors from the Redguards, Bretons, Colovians, elves, and Argonians.[3] According to some sources the fleet was composed of ships from all of provinces of Tamriel.[4] It was the largest allied naval force in Tamrielic history.[2] Sometime around 1E 2260,[5] they sailed to Thras, slaughtered all the Sload they could find, and used unknown magic to sink their kingdom into the sea (though Thras would rise again later).[2] 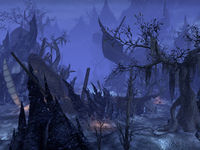 The shattered remains of the lost fleet in Coldharbour

Baron-Admiral Bendu Olo was said to have spared no expense preparing his fleet for the war against the Sload. According to some scholars he fully employed as much as three-fourths of Tamriel's shipbuilders while outfitting the All Flags Navy to brave the treacherous waters surrounding Thras.[6] Ships used by the fleet were manufactured primarily in the Shipwright's Regret, a shipyard in the eastern shore of the Rivenspire in High Rock. It was there where the mixed, provincial fleets were outfitted into the swiftest and strongest armada to ever sail the seas.[4]

The All Flags Navy sailed through the Abecean Sea and into the Sea of Pearls, the waters surrounding the Thrassian Archipelago. There, they sailed through a fierce storm for two days and were beset by a dense fog. The fog created what seemed like a solid cloud encircling the isle of the Sload. Once there, a magical projection of Baron-Admiral Olo appeared on the decks of the ships and issued orders to sack the largest island and lay siege to its coral tower. Soon after they began their assault, the blue light atop this coral tower began to pulse and bleed energy into the clouded sky. Afterwards, the island began to crack and sink into the ocean. The sinking island created a great whirlpool which sucked in roughly half the fleet.[3] These ships evidently were sucked into Coldharbour, the realm of Molag Bal.[7]

Eras later, the notes taken by members of the All Flags Navy still hold some of the only information available in the realms of men regarding the Sload.[2] Sload hold-outs in Auridon were wiped out by a returning remnant of the Navy after the sinking of Thras.[8] Baron-Admiral Olo's tremendous success with the Navy is said to mark when the Colovian Estates began to overshadow eastern Cyrodiil, which would eventually lead to the War of Righteousness.[9]