The UESPWiki – Your source for The Elder Scrolls since 1995
< Skyrim: Creatures(Redirected from Dragonborn:Millius)
Jump to: navigation, search 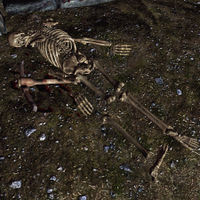 The skeletal remains of Millius can be found in Raven Rock Mine outside of a sealed door to Bloodskal Barrow, near the remains of Gratian Caerellius. According to Gratian's journal, he came to the mine as Gratian's assistant to study some ruins unearthed by the miners there. When Gratian discovered a strange weapon on a pedestal in the ruins, Millius tried to convince him to leave it there. Gratian decided to remove it anyway, and they were instantly attacked by draugr. Though Millius fought bravely, he was killed.

On the skeletal remains of Millius, you will find an enchanted weapon of leveled quality, a leveled potion of well-being and a small amount of gold.