The UESPWiki – Your source for The Elder Scrolls since 1995
< Skyrim: People(Redirected from Dragonborn:Madman)
Jump to: navigation, search 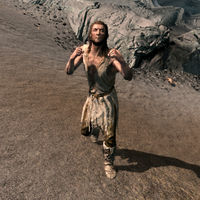 The Madman is a Nord bandit found in the wilds of Solstheim. He has apparently been driven mad from reading a Black Book, and will direct you towards it. He wears ragged boots and ragged robes, and carries some scribblings. He has a chance to spawn at several specific spots all over the island of Solstheim as part of a world interaction.

Approaching him, he says: "I know things. Hidden things. Things you aren't supposed to know." This presents three options to reply:

The conversation then follows with more ramblings, after which he becomes hostile and attacks you with his fists:

Secrets? What kind of secrets?
"The secret kind!"

Alright then. Where did you learn these secrets?
"The Black Book. It shoved them in there. With black slick fingers. My fingers are too short. I can't get them out."

Where did you find this Black Book?
"Oh no. I didn't find it. It found me. Here. I'll show you. See. Right there. But don't go there. You don't want these things in your head. You don't!"

I can see this is going nowhere. Good luck with all that.
"Luck won't help. I need something to pry these things out of my head. Why won't anyone listen to me? Listen to me! They're in my head!"

If he is killed, his body can be looted for a note which begins a miscellaneous quest to find the Black Book he was referring to.