The UESPWiki – Your source for The Elder Scrolls since 1995
< Skyrim: People / Merchants(Redirected from Dragonborn:Dremora Merchant)
Jump to: navigation, search 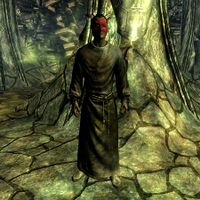 The Dremora Merchant is a Dremora that can be summoned by the Black Market power, one of the reward options from the quest Black Book: Untold Legends. When summoned, he approaches you and goes into the sell screen. He wears black robes and a pair of Boots.

The Dremora merchant has a more pleasant personality than many of his kind—he speaks with a refined voice more akin to that of a Dunmer than the low-pitched growl common to his race, and seems to delight in providing his services to you, unlike the Dremora Butler.

He will greet you by saying one of the following:

"You have many things I wish to buy."

"So soon? You must be hungry for a deal."

"Ah, a fresh mortal who seeks to bargain with me."

When you offer to sell your items to him, he will reply with one of the following:

"I'm sure we can strike a bargain."

"Haggling with you can be so...entertaining."

"I can hardly wait."

Once you have finished bartering with him, he will part ways by making one of the following remarks:

This is the merchandise found in the Dremora Merchant's merchant chest. These items are only available if purchased from the merchant; they cannot be pickpocketed or stolen. They are restocked every two days.