The UESPWiki – Your source for The Elder Scrolls since 1995
< Skyrim: Quests: Miscellaneous(Redirected from Dragonborn:Clean Sweep)
Jump to: navigation, search

In the Temple of Raven Rock, the residing priest Elder Othreloth has a huge problem with the Ancestral Tomb underneath the temple. While patrolling around Raven Rock between 1pm and 7pm, Second Councilor Adril Arano may visit the chapel and receive yet another complaint by the troubled priest: 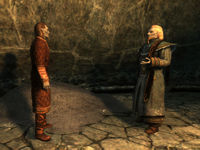 "When are you going to do something about our central Ancestral Tomb?"

Adril: "You wanted to speak to me, Elder?"
Othreloth: "I did indeed. When are you going to do something about our central Ancestral Tomb? I can't even go down there any longer. It's getting intolerable!"
Adril: "I'm sorry, Elder. I'm doing the best I can."
Othreloth: "I appreciate your problems, Adril, but I can't be expected to run a temple with those... things running around in there."
Adril: "With all due respect, those "things" aren't the only problem we have right now. Be patient, keep the door locked, and we'll get there when we can."
Othreloth: "Hmph. Very well. I'll just have to find someone else to assist us then."

With the authorities too busy to help him out, Elder Othreloth will have no choice but to lure adventurers like you to help him. When he sees you he will ask: "Are you here to pray, or perhaps pay your respects at our Ancestral Tomb?" When you ask him what the tomb is, he will immediately request some assistance and provide some background information in the process: "They are where we inter our dead. They are sacred places, meant to honor their passing. Sadly, we've been unable to use the Ancestral Tomb beneath the Temple as of late, and have resorted to other locations to scatter the remains." He will then proceed to explain that ash spawn have taken over the tomb, making it impossible to perform proper burial rituals. Offer to help him out and he will hand you the key to the tomb and wish you the best of luck.

Head downstairs and unlock the door to the tomb with the key. Once inside, the problem soon manifests itself, as a total of eleven hostile ash spawn will crawl out of the various huge ceremonial urns with the ashes of the ancestors. They will surface one by one at first, then two at a time. While most will be regular ash spawn, two of those that spawn near the end are leveled.

Dispose of them all as quickly as possible, because they can easily gang up on you. If necessary, exit the tomb through any of the doors to restore your health; the ash spawn cannot follow you. Lower-level players will find the Become Ethereal shout useful to avoid damage when carrying out hit-and-run attacks.

When all is said and done, loot the ash piles as they have a chance of carrying valuable loot, then leave the tomb and return to Othreloth. When presented with the good news, Othreloth will exclaim: "Spirits be praised! I'm hoping you didn't suffer much at the hands of those foul beings. Please, accept this as a token of my thanks." He will then hand you a reward, a leveled amount of gold.