I've created the first page that gives an overview of the quality of shops, guildhalls etc. of a city. I've created this subpage within the corresponding namespace, so it can be transcluded it needed and I also think it belongs here The data was taken directly from the MAPS.BSA file itself, and it's not possible to extract the name of the shops so easily. This is not a simple matter and therefore can't be done automatically. I've no time or opportunity to concern myself much with the game or visit every major city or at least the capitals to get the names via the game map. One can see that the city of Daggerfall has a lot of shops and therefore checking every single building would be pretty exhaustive. And imaging doing this for at least ~30 capitals, impossible. Therefore everyone who wants can add the name of the corresponding shop/tavern if desired. It would also be possible to provide the estimated position of a building in town e.g. north-western part etc., but the question is would this information be of real use? The most elegant way would be to created an interactive map-tool, but as I remember, this proposal was already made some years ago and didn't get much approval. And even than, how should one begin this? So leave the shop quality thing in table-form for now. Perhaps someone can create a better trail and perhaps it may be also possible to integrate the notes on this page into every further article of this kind. Perhaps someone has an idea how such articles could also be integrated into a city's overview-table. Everyone who can arrange this information into a more elegant way is welcomed to do this. I' will wait some time to see what people think about this, before adding the next one. At least Sentinel and Wayrest should also have such informations since every player will visit at least these two cities.--PLRDLF 19:49, 4 June 2011 (UTC)

Purely on the map question: if you can generate the necessary map tiles, I can start working out how to use our existing engine to do a map. I don't recall a discussion about it before, but I can't see why it wouldn't be wanted. rpeh •T•C•E• 08:38, 5 June 2011 (UTC)

No need for a complete restart[edit]

I believe it's not necessary to "invent the wheel anew". A couple of great tools were already created more than ten years ago when the game was highly popular, but many of them got lost. Some of these tools were recently uploaded by DelphiSnake a couple of weeks ago and I've looked into them a bit. One of them is a very impressive tool called "Iliac" which was used by Uniblab when he provided screenshots for most of the game blocks and city maps of the capitals. This tool is written in Tcl/Tclx and I played with it for the last past day. Although the script-interpreters and compilers have advanced over the years, I finally managed to run it. I've provided three screenshot to show what this tool is capable of. It only needs some of the games original files, but since Daggerfall was released for free, this should be no problem. The only drawback, this tool can't show the shop quality as I would want to. If this tool is not an option I may think of something different. 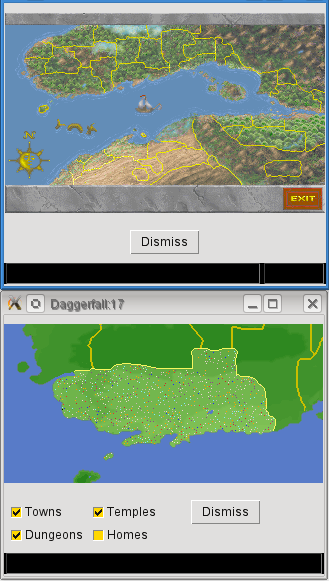 An overview map of the Iliac Bay and regional map as in the game itself, completely with filters for dungeons, cities, etc. 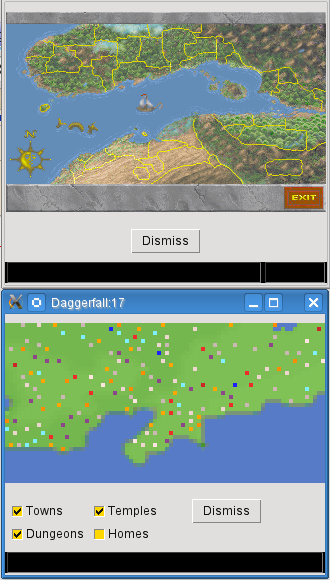 Like in the game, clicking the right mouse-button zooms in the regional map. 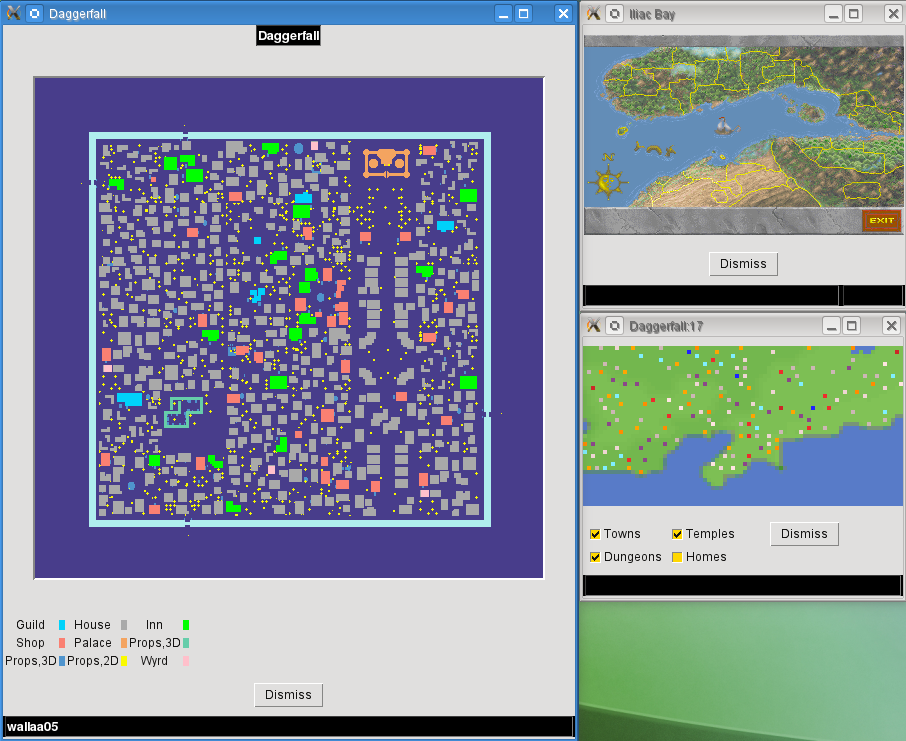 Clicking the city of Daggerfall brings up a complete city-map, including colored buildings, like in the game's automap.

Since it has been a while, is there any interest for listing the store quality at least for the capitals?--PLRDLF 11:11, 26 March 2012 (UTC)

Is the map viewer tool available somewhere? Looks really useful but can't seem to find anything like it around.— Unsigned comment by Scrollhog (talk • contribs) at 15:42 on 6 September 2018 (UTC)