Speak to a quest giver, who says:

"Go to (town). Find (building). Inside is a rare book, entitled (book title). Bring it back to me within (time limit) days, and I'll pay you. Simple enough, eh?" 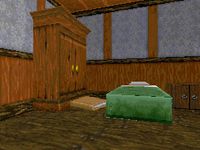 The book will be found on the floor

Head to the town where the book can be found and enter the building. If it is a shop and you enter during business hours you don't even have to pick the door's lock. There may be some guards waiting for you. Find the book within and grab it. Upon leaving the building, there may be a guard waiting for you at the entrance door, either a battlemage, an iron atronach, a daedra seducer or a werewolf. Kill the guard and return to the quest giver.

Upon returning the book to the quest giver, he will say:

"Ah. (Oath). Here is your guild fee. Maybe some day we can work together again."