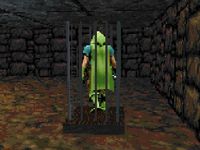 This battlemage already got himself into a tight spot

Sheogorath speaks to you:

"Oh, my. I bet ye weren't expecting me! My unbrothers and nonsisters are sometimes a bit slow, so I step in for them. Too bad for thou. You'll just have to cut thy deal with me. Be quick about it! Before the hour of the pale be passed, have I plenty to do elsewhere. So! Power the (player's race) craves to rub on the body and ease the four hundred sores of mortal life? Yes, Sheogorath has power, power enough to pull the branches across the eyes of the moon and rain blood over Tamriel. For this power, wilt thou send someone an invitation to tea for me?"

"To tea, to a tea party with me! Go, go to a place called (first dungeon), where the object of my gallous desires doth trip and pose and wear blackberry crowns. Wait ... do not invite this battlemage to tea with me. Now I remember. This (battlemage's name) the name is. Kill (him/her) to death, murder (him/her) fatally, that's what I wish. Then go from (first dungeon) to a lunatic asylum called (second dungeon) and see my (worshipper's description), (worshipper's name). The Wabbajack| for you (he/she) will have. Will wait for you for (time limit) days and then will go to marry the unknown heir of Rowanda. Now I bid you a yapow and gazeenza."

"La, rejected by a squalid (player's race) with lice in its hair. How far has Sheogorath risen! I shall have to ask for a raise in my allowance. Tirrah, (player's guild title/name)."

Travel to the dungeon named by Sheogorath and enter it. Once inside, find and kill the battlemage. There may be multiple enemies of this type within the dungeon, but you must destroy the specified target to successfully complete the quest. When the battlemage dies, a notification appears:

You have dispatched (battlemage's name) from this mortal plane. Now to see if Sheogorath still remembers your agreement.

Once your task is complete, travel to the second dungeon named by Sheogorath and find his worshipper within for your promised reward.

Speak to Sheogorath's worshipper and you will hear:

If you ask an NPC about Sheogorath's worshipper, you may hear:

If you ask an NPC about the Wabbajack, you may be told: