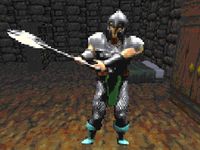 Dispose of a monk who murdered a score of Sanguine's acolytes 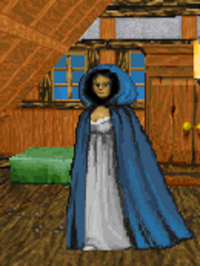 Sanguine speaks to you:

"Power is such a lovely word, isn't it? It drips from the tongue like honey. If power is your aphrodisiac, I would be ecstatic to present you with The Sanguine Rose. All you have to do for me in return is punish a perfectly awful priest who dared to challenge me. Sounds good to you?"

"You won't regret this, (player's first name), provided you fulfill your end of our agreement. This sanctimonious monk is not harmless; (monk's name) is (his/her) name and (he/she) burned my lovely worshippers to crisps. Go to the abandoned temple where (he/she) lurks, (dungeon), and rip (his/her) heart from (his/her) chest. My agent, (worshipper's name) will await you in (town). (Worshipper's name) does not like to wait so accomplish the murder in (time limit) days or less. I have the delicious feeling we'll see each other again, (player's first name)."

"A pox on you, (player's name). How dare you summon me forth and refuse my generous offer? Pray that I forgive you, (player's first name). Sanguine is an enemy none should have."

Travel to the dungeon Sanguine named and enter it. Once inside, find and kill the monk. There may be multiple enemies of this type within the dungeon, but you must slay the specified target to successfully complete the quest. When the target dies, a notification appears:

(Monk's name) is dead. Sanguine will be ecstatic, you hope.

Exit the dungeon and head to the town and building where the Daedra Prince's servant awaits with your reward.

Speak to Sanguine's worshipper after the monk is dead and be told:

"Charmed to meet you, (player's name). I'm (worshipper's name). Sanguine must be quite enraptured with you. He had The Sanguine's Rose set aside for his favored disciples. And now it's yours. I hope you enjoy it immensely.

If you ask an NPC about Sanguine's worshipper, you may hear: