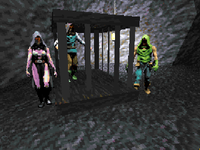 A vampire and a thief have already captured the Vampire Ancient, but for what purpose?

The Ring of Namira

A Voice from the Darkness[edit]

Namira emerges and speaks to the player:

"The desire for power gnaws at the gut, does it not, (player's first name)? I can see it does. Excuse my informality, but I feel like I know you, I recognize your craving as if it were my own. You want to control, and the thought makes you slaver like a starving wolf. I can fill your belly, but first, I need to know. Will you kill in order to fill this void?"

"Wonderful. You should see the look in your eyes, (player's first name). You will be mighty, I can see it in them. Now, your stepping stone to power is a vampiric ancient who has displeased me, (vampire's name). Know that (he/she) is a mighty adversary, and (his/her) asylum, (dungeon), is well protected. But you can and will kill (him/her). Once you have, go to my darling friend, (worshipper's name) at (building) in (town). (Worshipper's name) is a busy person, so don't keep (him/her) waiting more than (time limit) days. (Worshipper's name) will have a present for you that I think will make you very happy. Farewell, (player's first name). We will meet again, I know."

"No?! Now you taunt me, (player's first name). You tempt me out of my dark palace and then shun my company. If I thought you were merely being cruel, I could respect it. But I suspect that you are actually stupid, which I cannot abide. Therefore, I bid you a most disgusted goodbye."

Show the Vampire the Light[edit]

Travel to the dungeon named by Namira and enter it. Once inside, find and kill the target, a Vampire Ancient. There may be multiple enemies of this type within the dungeon, but you must destroy the specified target to successfully complete the quest. When the vampire dies, a notification appears:

(Vampire's name) is dead. Namira's hunger is sated -- now to satisfy your own desires by reporting to (worshipper's name).

With your task complete, head to the town and building named by the Daedra Prince and meet Namira's worshipper for your reward.

Speak to Namira's worshipper after the Vampire Ancient is dead, and hear:

"Hello, (player's name). I am (worshipper's name). You look ... sated. That murder agreed with you, I think. Well, I hope this will likewise please. Namira told me to give you her ring. Try it on and you will learn the meaning of hunger and fulfillment. Once you know that, you know power. Good day, (player's first name)."

If you ask an NPC about Namira's worshipper, you may hear:

If you ask an NPC about The Ring of Namira, you may be told: