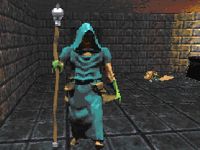 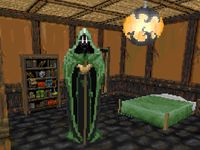 The Mace of Molag Bal

Molag Bal speaks to you:

"So you want power, (player's name). Power is a far more tangible quantity than wisdom, don't you agree? Now then, in order for us to judge your worth, we have a bit of toil for you to undertake. Nothing unpleasant, of course. You may rather enjoy it. A simple assassination, for which you will be rewarded with The Mace of Molag Bal. Then we can see if you're ready for real power. Does this sound agreeable?"

"We thought it would appeal to you. Now, listen carefully: your target is a Mage named (mage's name). This infernal sparkcaster has been invoking our name, drawing on our power, without a contract. Perhaps this is due to ignorance, but we cannot be merciful. Look for the mage in (his/her) laboratory, (dungeon) and destroy (him/her). Then, before (time limit) days have passed, meet our agent, (worshipper's name), a (worshipper's description), in (regional tavern) at a place called (tavern). There (he/she) will give you The Mace of Molag Bal. Do not tarry, time is short. We will be watching. Do not fail."

"You have wasted our time. We are not pleased."

Travel to the dungeon named by the Daedra Prince and enter it. Once inside, find and kill the mage. There may be several enemies of the same type within, but you must slay the specified target in order to successfully complete the quest. When the mage in question dies, you receive a notification:

"(Mage's name) is dead. You have fulfilled your contract with Molag Bal. Now to collect your reward."

However, you must be quick. The mage will vanish after three in-game minutes if still alive, with the following message:

"(Mage's name) lifts his staff and disappears in a thunderclap."

If this happens, search the area for a note and read it:

A map showing the location of (second dungeon) marked with the notation, "Remind (minion's name) to lay in supplies. Indications that Molag Bal has detected me."

Travel to this new dungeon, find the mage again and kill him or her for good. Once the target is dead, travel to the regional tavern named by Molag Bal and meet his worshipper there for your reward.

Speak to Molag Bal's worshipper after the mage is dead to hear:

"Hello, (player's first name). You made it. Molag Bal sends his compliments. And, of course, The Mace of Molag Bal. Enjoy it and fare thee well."

If you ask an NPC about Molag Bal's worshipper, you may hear:

If you ask an NPC about the Mace of Molag Bal, you may be told: