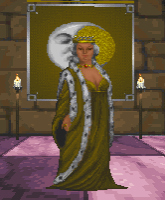 This quest technically begins immediately after the previous quest ends, if Lord K'avar escaped your grasp. After that, you may notice that packs of three archers appear from time to time to harass you. When the first of these archers is injured, you hear:

Did you think that you could dispose of Lord K'avar so easily? A Lord of Sentinel is no one to cross lightly!"

Although they only show up about every 33 in-game hours, the archers are still very annoying. However, you can get some good loot from them, especially if you are at higher levels. Eventually, 31 to 93 days after Lord K'avar's escape, you receive a notification:

A stocky knight in the livery of Sentinel stops before you and salutes. "(Player's name)? A letter for you, personal message from Queen Akorithi herself."

Check your inventory for the letter. It reads:

I regret to inform you that your noble
service to Sentinel has been undone.
Lord K'avar still has a few friends, it seems.
he [sic] has escaped from the dungeon, only days
before he was to be hanged.
I would be most grateful for your assistance
in putting this matter to rest once and for all.
Please come and see me at your earliest convenience.

If you wish to embark upon this quest, travel to Sentinel and speak with the queen. The time limit for meeting Akorithi depends on the distance between the quest start location and the City of Sentinel. However, there is no way you can check this time limit, so make haste.

When you speak to Queen Akorithi she says to you:

"Ah, (player's name), I was hoping you would come. My spies have located the elusive Lord K'avar. He has turned up at the court of Wayrest, of all places, apparently trying to obtain support for his pathetic claim to my throne. Wayrest would not be so rash as to openly give refuge to a convicted traitor to Sentinel, but he is hiding somewhere in Castle Wayrest, and I want you to find him and bring him back. Alive if possible, but kill him if necessary. Do not let him escape again."

The time limit for finding Lord K'avar in Castle Wayrest depends on the distance between Sentinel City and Wayrest City. However, as before, you have no means to check it. Travel quickly to Wayrest City and enter the castle.

Finding Lord K'avar within the castle can be somewhat tricky because the dungeons of Castle Wayrest have these nice red brick teleporters. But the following walkthrough should help. In the castle dungeons you will encounter mostly knights, orc shamans, wraiths and vampires.

Starting from the dining hall, take the door to the north. As soon as you open the door, the royal knights will start to attack you. One of them is right in front of you in the hallway. From the intersection go west and up the stairs. Follow the hallway until you reach a room, you will encounter an undead creature or another knight on your way. 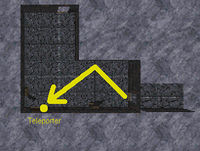 In this room are many open coffins and corpses as well as a foe in the room to the north. On the south wall there is a red brick teleporter; go through it. 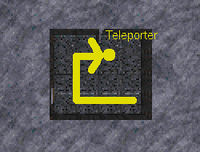 You will be teleported to some sort of armory. A foe will also be in this room. Leave this room via the teleporter near you.

You will be teleported to the northwest corner of a tiny room. In this corner there is a switch, but you may not see it. If you look directly at it, search for it using a diagonal viewing direction. Pull this switch to unlock the trapdoor to Lord K'avar's hideout deeper within the dungeons. Leave the room through the teleporter behind you. 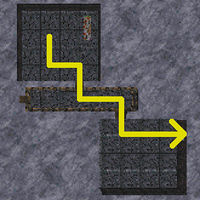 You will find yourself in a room with a torture instrument and a foe. Leave the room through the south door, walk a few steps to the east and enter the room. There is a secret door on the east wall of this room, open it and go through the door. 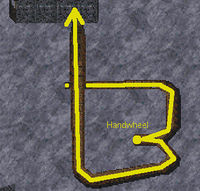 Leave the room trough the west door, cross the hallway and enter the room on the other side. Go through the red brick teleporter. 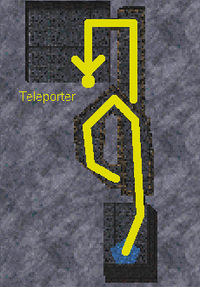 You will emerge in a fountain and a foe will be just in front of you. Walk down the stairs and at the intersection turn north. Go north until you reach a door. Enter the room and leave it trough the teleporter on the south wall. 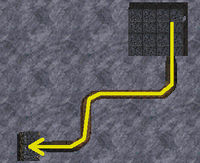 You will be teleported to yet another room, leave the room trough the secret door on the south wall and go through the orange colored passage. Go through the door at the end.

Once you are in the hallway go south and through the first door to the east. There will be some foes in the room and an open trap-door. Go down the shaft; either jump or use magic. 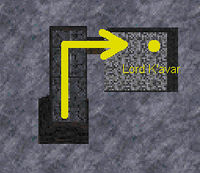 Lord K'avar will be in the room at the bottom of the shaft.

Ready for a fight

Approach the traitor and speak to him. He says:

"You again! (Oath), will you give me no peace? I'll settle you this time!"

He will than transform into a ranger and will attack you. However, he is not so eager to fight. If you hit him once, he shouts:

If you accept his surrender:

Lord K'avar drops his weapon, and you quickly bind his hands and blindfold him to prevent any further trickery. Now to make your escape from Wayrest...

If you do not, he steels for battle with:

Fight Lord K'avar to the death. When he is dead, you receive a notification:

The traitor Lord K'avar is dead.

No matter which option you choose, the outcome is the same. Return to Queen Akorithi for your reward.

After you have either captured Lord K'avar or killed him you must get out of the castle dungeons. If you have no recall spell, you must do this the traditional way, which is a lot more easier than finding Lord K'avar. For the start climb up the shaft or use levitation. 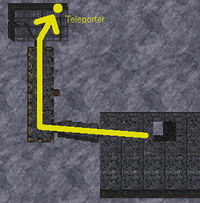 Once you are out of the pit leave the room through the west door. Follow the hallway north and enter the room. There will be an undead monster in this room. Go through the teleporter. 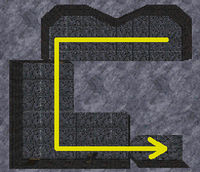 You will be teleported to the room where you started your teleporter journey. There will be still a foe, provided you didn't kill him when you entered the room for the first time. Leave the room with the coffins through the east door.

Return to the dining room of the castle; all guards will now be in attack mode, so leave as quickly as possible to avoid unnecessary encounters.

Return to Queen Akorithi in Castle Sentinel as quickly as possible.

If you return to Sentinel with Lord K'avar, Queen Akorithi will say:

"Well, well, if it isn't my loyal Lord K'avar, come back to me. Did you really believe you could escape my wrath? Guards, take him downstairs and execute him immediately."

If you return to Sentinel after killing Lord K'avar, Queen Akorithi will say:

"Lord K'avar deserved death. I would have preferred to execute him publicly, as an example to others of his ilk, but I am pleased that this sordid matter is finally closed."

The queen will then add:

"(Player's name), I knew I could count on you. The friendship of the Queen of Sentinel is reward enough, but I have prepared some more tangible gifts as well."

Receive an enchanted item and a sum of gold for your efforts.

This quest doesn't provide any reputation.