The UESPWiki – Your source for The Elder Scrolls since 1995
< Daggerfall: Character Creation(Redirected from Daggerfall:Immunity)
Jump to: navigation, search 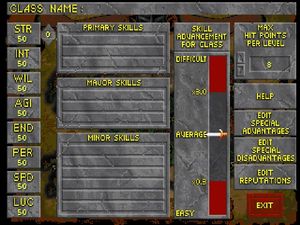 The Custom Class Generator (or ClassMaker) allows you to create your own class. A new class must include:

All other custom features are optional. Adjusting some of these, such as adding special advantages or disadvantages and higher or lower health points per level, makes it respectively more difficult or less difficult for the class to improve in skills and thus rise in levels. The Skill Advancement bar represents the difficulty of a custom class learning new skills.

The name of your custom class may contain up to 23 letters. This is purely for role-playing purposes and does not affect gameplay.

More than anything else, skills define a class. Pick the most important three skills for your custom class as primary skills, the next three important skills as major skills, and the next six important as minor skills. The other skills will be available for your new character class, but they will be very low when the game begins and will be more difficult to raise. It is more important to pick skills most commonly used by the new class for the primary and major skills. These skills will increase with constant use and, as the skills increase, so will the character's level.

Some disadvantages work only in certain places. Many have the options "In Darkness", "In Light", and "In Water". "In Darkness" means that the disadvantage will work only in dungeons and at night. "In Light" means that the disadvantage works only in daylight or buildings that are well-lit. Any advantages you have from your race or vampirism will override your potential weaknesses. So High Elves, who are immune to paralysis, could take a critical weakness to paralysis and remain immune.

Editing Reputations is an optional class creation feature which allows you to help determine how certain broad societal factions are inclined to react to you. These groups are not the only reputation groups in the game: they are merely the broadest and the most common. The base average of all the reputation groups together must always equal zero. Thus if you add five points to your reputation with one group, you must subtract a total of five points from the others.

Note: In order to edit these, you must click on the darker bar to the left of the category name.

This table lists all effects that influence the dagger on the Skill Advancement for Class chart. Each effect is measured in points, where one point is the smallest increase/decrease possible. For comparison: To get to the lowest factor of 0.3, you need a total of -12 points, while the highest allowed value is 40 points.