"Some woodsmen have hired the guild to kill a spriggan. Seems the monster is attacking them when they are out in the woods logging. Want to take a hack at it (player's name)?"

"Two attempted ambushes have failed. The spriggan is just too smart. You'll have to go to its lair, in (dungeon). Get back to me within (time limit) days and I'll have (random gold) gold waiting for you."

"Fair enough. Run along. I've got to find someone to take this job."

"You attack me without cause, (player's race). Yes I did wreak vengeance upon the slayers of wood. Know that they did slay seedlings of mine. Would you stand rooted while someone slew your seedlings? I have no quarrel with you. Convince the woodsmen to prune with care, and I shall leave them in peace. Will you take this mission up?"

You will now have to choose whether or not to agree to the spriggan's proposal.

If you do not wish to accept the spriggan's offer, it says:

"I should have known better than to trust a creature of flesh. Now I shall give you no quarter."

The spriggan will continue to fight to the death. After you kill it (whether or not it made an offer), the following message will appear:

The spriggan is dead. Those woodsmen can log in safety now. 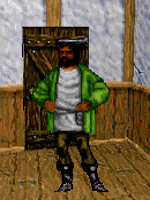 The leader of the woodsmen

If you accept the spriggan's offer, it will continue:

"The main culprit is (woodsman's name), who hacks down trees without care. Go to (town) and secure his promise. Do not visit me again. I shall know of your success or failure by how the woodsman [sic] do their work."

Travel to the town where the woodsman lives and ask around to learn his location. Enter his residence and talk to him, and he will say:

"So the tree creature wants to cut a deal, eh? Well I suppose I can convince the boys to only log the big trees. But if his kind attack us again, we'll burn every sapling we can find! You've got yourself a deal, (player's name)."

Once you either kill the spriggan or get the woodsman to agree to its proposal, return to the Fighter Quester. If you killed the spriggan, he will say:

"The spriggan is kindling? You are proving yourself to be quite reliable, (player's guild rank).
Here is your (random gold) gold as promised."

If you accepted the spriggan's offer, he will say:

"You worked it so the woodsmen and the spriggan ain't fightin'? Very clever (player's name). You'll go far if you keep those wits sharp."

There is also a 50% chance the Fighter Quester also gives you a dungeon map, saying:

"By the way, since I'm feelin' charitable, here's a map to a hole called (dungeon). Full of monsters needin' killing, treasure to loot, the works. Have fun."

If you accept the spriggan's proposal and talk to the woodsman, you will gain additional reputation according to the table below: