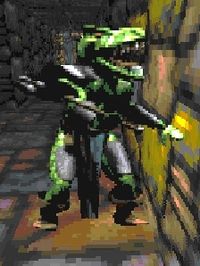 "Hey, alright, your funeral, (player's first name). Listen, knock off that Daedroth and get back here in (time limit) days for your reward. I don't know how long that thing's gonna be around, so you're gonna want to move your ass. And listen to me on this, (player's first name) -- go prepared for a hell of a fight."

"I don't blame you, (player's first name). I wouldn't wanna take on a Daedroth either."

Prepare yourself before embarking on this quest, do not forget that you need mithril weapons or better to harm a daedroth. Travel to the dungeon the Fighter Quester mentioned and slay the creature. There may be more than one daedroth depending on your level and the dungeon. When the correct daedroth is slain, you will receive the following message:

Return to the Fighter Quester after killing the Daedroth, and he will say:

"Hey, you're a better (player's race) than me, (player's first name). Daedroth-killer. I like it. Here's your gold."

There is a 50% chance he will also give you a random dungeon map, adding:

"Since you didn't even blink at offing a Daedroth, take this map to (random dungeon). Plenty of fun for a (player's guild rank) like you."