Bats (or Rats) in the Belfry[edit]

"I am (Fighter Quester's name). I have a relatively menial job, if you are willing to take it. Actually, some members prefer these jobs because they pay just as well as the more difficult ones. A house here in town has infested by giant rodents. The wife claims they are rats, the husband claims they are bats. Either way, they want them gone. Are you interested?"

"The bats have infested (building). Go there and kill them all and you'll get your pay. I can only give you one day to finish this one."

"Obviously you have no love for the Fighter's Guild. I will make sure to tell them what you really think." 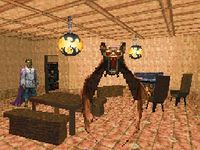 This quest is almost identical to the non-member quest A Rat Infestation, but this time there can be either bats or rats at the building. Just head to the building in town and kill all rats or bats that appear. At every three in-game minutes there is a 60% chance that one creature will appear; there can be a maximum of seven altogether. When you have killed the last bat or rat, you get a notification:

Thats [sic] most of them. The Fighters Guild won't quibble over the rest.

Report back to the Fighter Quester once the building is clean. The whole task must be done within a day.

Upon your return after cleaning the building, the Fighter Quester will say:

"Killing bats, even giant ones, doesn't take much skill, but it pays the same, eh?"