If you are a vampire, you will notice something one night:

An unfamiliar object in your pack catches your eye. It is a letter, addressed to you in an elegant flowing script. How did that get there?

Open your inventory and read the letter:

Matters of Life and (Un)Death[edit] 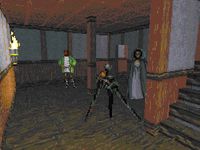 The Fighters Guild colludes with many vampire tribes

Proof of your trustworthiness

Head to the town named in the letter. Ask around to determine your contact's location, enter the building, and speak to the vampire. If you are still carrying the hunter's letter, a prompt appears:

Do you want to show (first vampire's name) the letter from (hunter's name)?

If you choose "Yes", you show the letter to the vampire and hear:

"You have done well to bring this to me, (player's name). (Hunter's name) has been the bane of (bloodline) for years. With this advance warning, we can save the lives of many of our kinfolk. Do not underestimate the danger you are in, (player's first name). (Hunter's name) is ruthless and competent, and (his/her) spies are everywhere. (he/she) would make an excellent addition to (bloodline) -- perhaps (he/she) will yet. Be that as it may, (he/she) knows your name, and do not doubt that (he/she) will attempt to make good on (his/her) threat. May the night keep you safe."

Do this and you will fail the quest. If you wish to remain a vampire this is no real loss, save for being harassed by the vampire hunter's legion of knights for some time afterward.

If you answer "No" (or are not carrying the letter), you are told:

(Player's name), isn't it? I have heard good things about you from the rest of (bloodline). So, you want to find your bloodfather. An understandable urge, although this is a privilege not usually granted to one of your youth. However, you have made such progress in (bloodline) already, I believe I can make an exception. Let me see, he must be either (first elder's name) or (second elder's name). You can find them at (first dungeon) and (second dungeon), respectively. I would advise against intruding on an elder's seclusion lightly, however. It would be best if you looked up (second vampire's name) of (second town). (he/she [sic]) is the Keeper of the Bloodline, and will be able to tell you with certainty which of (bloodline) elders is your bloodfather. Take this bracelet to (him/her) so (he/she) will know I sent you."

Time is of the essence, so decide if you want to meet the second vampire or explore the possible dungeons on your own. Choose wisely, as the wrong dungeon will still hold a Vampire Ancient (just not the one who is your bloodfather) and he will not be happy at your intrusion:

"Stripling, do not disturb my mediations [sic]! Begone, or my hunger will force me to slay you!"

When this incorrect elder dies you receive a notification:

You have slain (elder's name), Elder of (bloodline).

You will not, however, be cured of your vampirism. In addition, the Elder's demise will significantly damage your reputation with his vampire bloodline. 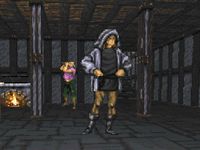 The Keeper of the Bloodline

To be sure which Elder is your bloodfather, head to the second town and find the second vampire there. Do so quickly, as you only have one to three days to make it to the meeting; if you miss the appointment, other vampires will discover your intention to destroy your line's bloodfather and they will start hunting you down. In addition, both your vampire contacts will henceforth be gone. If you hit one of these vampires for the first time, it will hiss:

"Bloodtraitor! We have learned of your treachery. You will never find (bloodfather's name), although your days as one of (bloodline) are about to end, do not worry. (Hunter's name) will not need to hunt you down."

Once you have located the second vampire, show the bracelet and be told:

"Hmph. You are very young to be entrusted with such information. However, since you carry (first vampire's name)'s token, I will reveal to you where your bloodfather, (second elder's name), resides. You will find him in his lair in (second dungeon). Be aware that at this time of year, the elders do not like to be disturbed by anyone. Intrude upon (second elder's name)'s solitude at your peril." 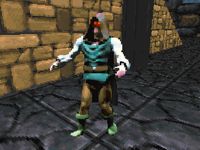 The bloodfather is not reaching out for a hug

Now that you know the location of your bloodfather for sure, travel to the dungeon and find him within. Being an Elder of the bloodline, your bloodfather will be a Vampire Ancient, so be prepared for a vicious battle. When you hit him for the first time he will hiss:

"(Player's name), your blood calls to me. Why do you strike your own father? (Bloodline) punishes patricide with death. Do not force me to carry out this sentence myself. Flee, my child!"

Destroy him for good, and your non-vampiric portrait appears, along with a notification:

As (bloodfather's name) dies, you feel the curse of vampirism lift from your soul. You are no longer a vampire.

Destroying your bloodfather will severely damage your reputation with his vampire bloodline, but this is likely a small price to pay for being rid of vampirism once and for all.

You may lose reputation during this quest with the first vampire's e.g. your bloodfather's bloodline depending on your actions.

If you ask an NPC about the hunter, you may be told:

Once the quest is over, NPCs may say when asked for any news: