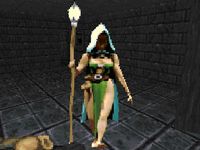 The Healer should not have been so uncouth

Azura speaks to you:

"You dare summon forth Azura of the Crimson Gate, pleading for power? I don't know if you are worthy of such favor. In fact, I doubt it very much. I suppose that if I demanded that you murder a priest who has been saying very, very rude things about me, you would refuse even that small, simple request. Would you do that for me?"

"You would! Oh jolly good. Well, this perfectly awful priest is also a Healer, if that means anything. Isn't that just typical? As usual with these self-rightous [sic] types, (priest's name) is secluded in (dungeon), cleansing or some such ridiculous thing. Anyway, why don't you hop on over there and stick a sword in (him) or something. And then scurry over to (town) and see my dear darling (worshipper's name) who will give you my Star. That's enough power for anyone. I think (time limit) days is time enough for this, don't you? Oh, good. Hurry along then, (player's first name). And don't be a stranger. Say hi to (worshipper's name) for me. Okay, 'bye."

Travel to the dungeon named by Lady Azura. Once inside, find and kill the priest. Your target appears as a Healer; there may be multiple instances of this enemy type within the dungeon, but you must slay the specified target in order to successfully complete the quest. When the target dies, a notification appears:

You have killed the Healer, as you promised Azura.

Once your job is complete, travel to the town named by the Daedra Prince and meet her worshipper. Ask around in town to determine where to find your contact, who waits in a local library. Enter the building and speak to Azura's worshipper for your reward.

Speak to Azura's worshipper and be told:

"Hmm? What? Do I know you? Oh. Oh, (player's name)! Have you been here long? I'm sorry, I was just day-dreaming about my mistress, the Lady Azura. That candle reminded me of the scintillation of her eyes, you see. How silly of me. Well, here's Azura's Star. She doesn't give this to just anyone, but don't let it go to your bean. She was mine first."

If you ask an NPC about Azura's worshipper, you may be told:

If you ask an NPC about Azura's Star, you may hear: