Speak to the Captain about Fort Business after exposing the priest Nuncius relating to the missing shipments of alcohol. The Captain says that he fears that weapons are being smuggled out of the fort and being shipped and sold in Vvardenfell. With a low supply of weapons, the fort's defense is lacking and morale is dropping further. The Captain asks that you cooperate with two of his soldiers on the matter, Saenus Lusius (in the General Quarters) and Gaea Artoria (in the General Quarters, Upper Level). Speak to them and choose one of them as your companion to investigate the matter.

Select one of the soldiers to be your companion by speaking to them. Lusius will find the smuggling ring quickly but is of little help in combat, while Artoria is an effective soldier but doesn't seem to know anything relevant about the smuggling. Either way, you will eventually be directed to Zeno Faustus in the Armory. Choosing Lusius will directly take you to Zeno, while choosing Artoria will mean you have to speak to a guard. If you're with Lusius, Faustus' disposition towards you must be at least 60, but Artoria's straight-laced nature will require him to have a disposition of 80+. Eventually, Faustus will mention that he overheard two soldiers talking about the Gandrung Caverns and a weapon stash there. 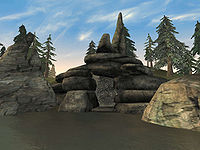 Faustus tells you that the caverns are a bit northeast of the fort so head out that way. The cavern entrance is not far from the fort - look for a rock spire at the north end of the closest inlet (check your local map if you cannot find it). If you are having trouble spotting it, try going east from the fort to the water and following the coastline around.

Once inside you'll encounter no immediate resistance (other than a few rats) but you'll soon find one Mus Roscius who will attack you on sight (be wary as he is tough even for high-level characters). Most opponents in the cave have a paralysis weapon so ranged attacks, Resist Paralysis and/or Cure Paralyzation effects are recommended. Also, use your companion to your advantage. It is best to try and surround each opponent so both of you can attack at the same time. With this strategy you can hit your enemies so often that they rarely get a chance to swing at you. Note that you don't have to kill everyone if you take Saenus Lusius, you get the option to talk to the leader and work out an agreement for the smugglers to leave. Also, it is very important to get the companion back alive or the one you didn't take with you will attack you on sight, forcing you to kill him/her and breaking the Main Quest,[verification needed — fixed by latest patch?] unless you use a Calm Humanoid spell on them.

Continue to explore the entire cave, killing anyone that you encounter. Once you kill them all (5 total) you will receive a journal entry to return and speak to the Captain. If you chose Saenus, you can also make a deal to let the leader of the smugglers go if you wish (he will give you the unique Nordic Axe of Paralysis, a very powerful axe that could come in handy especially against werewolves). Don't forget to take all the loot lying around (nothing very exciting however). At the north end of the cave you will find a piece of stalhrim, which can be mined and used to create new armor or weapons (during the East Empire Company Quests you receive a pickaxe that can be used to mine stalhrim).

Return to Captain Carius at Fort Frostmoth with the news of the smugglers. This will automatically lead into the next quest, The Disappearance of Captain Carius.