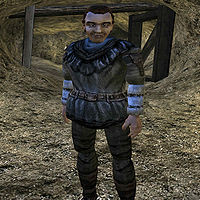 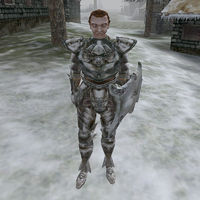 Gratian Caerellius is an Imperial commoner working in the Ebony mine of Raven Rock. He can be found wandering around almost at the bottom of the mine, at a three-way crossing. He can be recruited as a guard in the quest, Hiring Guards. It'll take a few days to get him equipped and trained.

Initially, Gratian wears a common shirt with matching pants and shoes. After he's made a guard, he will be wearing a set of steel armor including the cuirass, greaves, both pauldrons, both gauntlets, boots and shield. He will also be wielding a silver longsword. Aside from his natural charm and ability to absorb fatigue from others, he knows no spells.

"This is interesting news. I was just telling someone the other day that someone needs to make sure his place is safe. Looks like I'll get a chance to put my money where my mouth is, eh? I'll do it."
"Yes, like I told you, I'll do it."