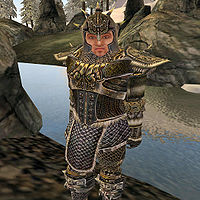 Brandr is a Nord warrior and the husband of Kjolver. Brandr has not been faithful to his wife, engaging in an extramarital affair with Erna the Quiet. Kjolver will offer you a reward if you slay Erna. Erna and Brandr are meeting on the bank of the Isild River. When you attack Erna, Brandr will attack you. Slaying him will not prevent you from completing the quest. Aside from his natural resistance to shock, immunity to frost, ability to shield himself, and a natural frost damage spell, he knows no spells.

"Let me introduce you to Erna. She and I have a love my wife would never understand."

After you kill Erna:

"You talking about that missionary from the Imperial Cult? Pretty little thing, Redguard? Yeah, I saw her. It was a few weeks ago. Said something about heading to the Thirsk mead hall to turn the residents away from their mead. Thought it was evil, or some such nonsense."