The UESPWiki – Your source for The Elder Scrolls since 1995
< Mod / Skyrim: Beyond Skyrim: Wares of Tamriel: People
Jump to: navigation, search 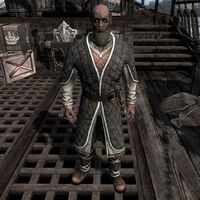 Captain Olmstead Reyn, a Breton citizen, is the captain of the Dawn's Venture. He wears fine clothes and a pair of fine boots and carries a Khajiiti iron sabre, a copy of the key for the ship interior and a random amount of loot.

Olmstead follows a similar routine to his fellows crewmates, starting his day early at 6 am, working outside in the deck with Atla for 14 hours. At 8 pm he head down to the cabin for a 2 hour meal and interaction with Cardana and the crew and at 10 pm, he goes to the trapdoor for to sleep. If approached he has a few lines to say something like "Here to shop? Cardana's the one to see.", "She's a fine ship, but she's no Celestine.", "Watch your step, she's rolling today." and "Captain Olmstead, of the Dawn's Venture. Formerly of the Celestine."

Should you start dialogue with him, the player can ask if he is the captain of the ship, to which he confirms but states this enterprise: "That I am, that's why I call myself Captain Olmstead. Though, I will say, I'm not the owner. That would be Cardana. I steer her safely from place to place, wherever she means to go. No ship has ever been lost under my command, and that's more than I can say for some." You can ask about the ship called Celestine that you can hear him muttering about. He will describe his demise: "Ah, that was a real tragedy. Her owner was a damn fool. Well, he meant well, but he went about it in a damn fool way. He planned to put me out to pasture, it was his way of taking care of me for all my years of service. Never mind whether I was ready to go! He needed a younger, steadier hand at the wheel, so he said, and he certainly got the first. The young upstart ran poor Celestine across the Caladien Fangs and sank her straight to the bottom. On a clear day, you can still see her down there. Oh, but she was a beautiful ship. Still is, for that matter. Maybe one day I'll find a wizard who can bring her back up for me."

The captain has a number of rumors should you ask about what he knows of the other provinces of Tamriel. Although in a not necessarily direct way.

Olmstead has some scene encounters with Atla and Cardana Pallo:

Olmstead Reyn: "Did I ever tell you about the time I was hired to take a man from Daggerfall to Dawnstar?"
Cardana Pallo: "Yes, I remember."
Olmstead Reyn: "He paid up front, and that was fine by me. But two weeks into the voyage, he starts getting a little worried about how long it was taking. Turns out, he wanted to go to Dragonstar the whole time. Can you believe that?"
Cardana Pallo: "You don't say..."
Olmstead Reyn: "That's why I get them to show me, now, on a map, where they mean to get to."

Note: This article is a stub. You can help by expanding it.
Retrieved from "https://en.uesp.net/w/index.php?title=Beyond_Skyrim:Wares_of_Tamriel/Captain_Olmstead_Reyn&oldid=2456569"
Categories:
Hidden category: