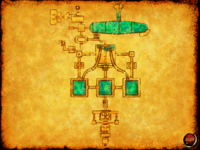 The Soul Cairn is a dangerous place. While there are fewer marauding daedra, you now have to deal with undead horrors of all types. There are no healing crystals here, so tread carefully and use your resources wisely. 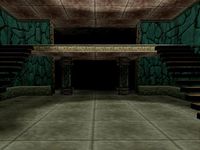 This is the destination from the great teleporter at Point K on Level 2b. Be prepared for a fight, as you will be immediately met by an assortment of the Soul Cairn's denizens; these include Ghosts, Wraiths, Skeletons, and Morphoid Daedra.

Point B - Hall with Ledge[edit] 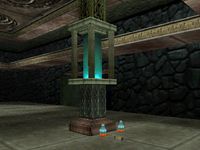 Another letter from your friend

Near where you arrived you find another scroll from your friend, warning you to stay away from the wraiths since apparently they cannot be killed. This is not entirely true, but they are extremely dangerous opponents. Later on, you will find an easier, and much quicker, way to get rid of any wraiths in your path. Additionally, calling them "mad as a loon" will sometimes calm them down enough to not attack.

Moving onward to the next room, you come to a split in the path and a plaque which gives some insight into this strange place:

[[A stained glass window depicts, to one side, many people laboring hard, burdened with great loads, and suffering the agonies of war and death. On the other side the people put down their burdens and are transfigured by a blazing green light which strips them of their tattered soiled garments and leaves them in a perfect splendor of body and spirit. Beneath the window is a simple inscription:]]

THE SOUL CAIRN
Once they struggled, hammered, cried
Fought for justice, honor, pride.
Now from time and tide released
They guard and serve in silent peace 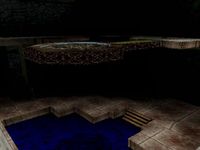 Not as serene as it seems

The two hallways from Point B converge in this large hall. Both sides can be approached from either floor, but beware of pitfalls. A shallow pool dominates the room, and a few potions can be found scattered about. A Morphoid Daedra patrols the upper level, and carries an Oht Sigil of Entry. Kill it and take the Sigil. Ghosts and Wraiths also haunt this area, so be cautious. 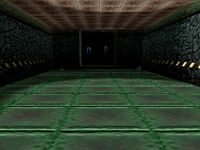 Memorials line the walls of this corridor

This hallway is adorned with many plaques devoted to the history of the Soul Cairn. On careful inspection, you will notice the sixth one on the left is different. This inscription is quite odd:

Remember these, as they will come in handy further on. 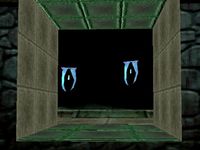 A pair of Oht Sigils of Warding block the way here, denying passage to anything beyond. Fortunately, the Oht Sigil of Entry you found at (Point C) allows free passage. 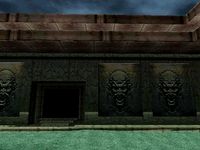 Past the Sigils at Point E, you encounter another wraith. If you attempt to converse with it, you soon find out that the spectre was once Kirel Aman, the Praeceptor Superior of Battlespire. He was captured and forced to tell all by the Daedra, then cursed to an eternal torment as a wraith. He also tells you of possibly the only way to kill a wraith (other than to kill its creator and master). If you agree to perform the ceremony and Kirel's soul is destroyed, it leaves behind a Gem of the Hero (heals health with many uses). 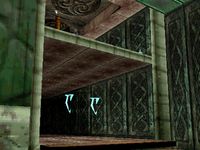 One of three blocked halls

These three hallways are blocked by Ayem Sigils of Warding. Not being able to find the appropriate entry sigil nearby, it looks like your only option is to go for a swim. Take care that you aren't carrying to much weight, otherwise you will sink like a rock and drown. You find the Sigil of Entry for these passages later on at Point I. 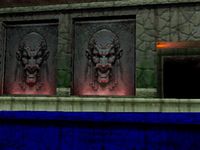 Time to get your feet wet 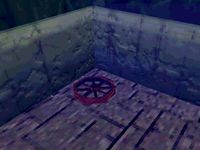 Two rooms are accessible on either side of the courtyard at Point F. Each contains a very wide, very deep pool. Assorted potions may be found scattered about, and roving undead guard the area.

There is a handwheel deep under the water. Turn it to cause the third platform at Point I to rise.

Under the surface, the north wall of each pool is broken by a large cavern. These lead to the pool at Point I. Additionally, the two caves are connected by a smaller cave about halfway in. A Coffer of Restoration can be found near its western end. 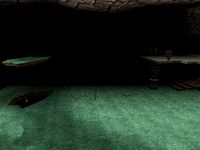 One platform is raised, revealing a potion hidden underneath 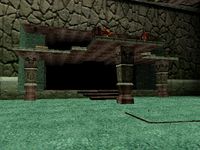 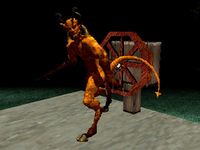 A Morphoid Daedra guards the handwheels

You emerge from the water on the north side of the room. Numerous enemies and haunt this space, beware of their long-range spells. The south exit is the other side of Point F, and still warded. Exits to the east and west connect to the rooms with the pools via Points J, but are warded by more Ayem Sigils.

There is an exit to the north on the second floor, but the gap is far too wide to cross at the moment. Taking a look at the floor, there are three sections that do not appear contiguous with the rest; turning the handwheel at Point H will have caused one of these to rise (revealing a hidden potion in the process), but the other two must also be activated to close the gap.

The southern exit also contains a lift to the corridor's upper floor, which extends into the main chamber slightly. Head up, and confront the Morphoid Daedra lurking there. After destroying him, take his Ayem Sigil of Entry. Turn both handwheels next to where he was found, and watch as the remaining two platforms rise up to form a path across the room. Jump across and head out the northern exit. 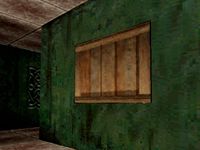 The cupboard is currently inaccessible... 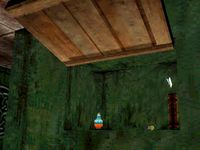 ...but it is filled with goodies

On one side of these rooms you find a cupboard which does not open when you attempt to get in. A careful search will reveal a mechanism on the opposite side of the room which causes them to open, revealing some useful items. Beware of wandering enemies.

The eastern alcove contains an interesting scroll; read it and you will learn a mantra with allows you to convince the Skeletons to fight alongside you. 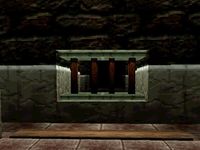 Beware, your enemies can see you coming

A Morphoid Daedra patrols this area, and carries a Hekem Sigil of Entry, which you need to pass the wards at Point O. Relieve him of this item. 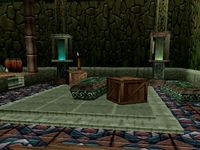 Crypt of the Ideal Masters

You find three coffins in this room, two of them protected by riddles. Using the answers from a plaque you found at Point D you know the two answers to be "grave" (alternatively "tomb" or "crypt") and "pig" (alternatively "hog" or "swine"). Inside each coffin you will find some items as well as a bluish crystal that, when touched, begins to speak. Each gem appears to be the soul of an Ideal Master, the leaders of the Soul Cairn. They aren't interested in helping you unless you agree to perform a strange ritual. The ritual loses its appeal when it is revealed that this ritual will kill you, so move on, but remember what the Masters told you. In the northeast corner of the room you find an object called the Rod of the Pilot. Take it, even though its purpose isn't yet clear. 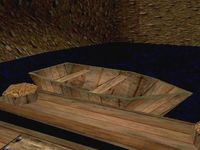 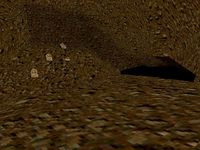 Inside the hidden cave

You find a boat here, tied to the dock. If you don't wish to swim again, click it to get in. Steering the craft takes a little practice, but once you get the hang of it the vessel affords easy passage across this small lake.

Halfway between Point M and N is a small cavern which is not marked on the overview map. Hop off the boat and navigate an underwater passage to enter. Within, you can find some useful potions and other items scattered about, guarded by random enemies. Additionally, head up the western slope to find a scroll. Read it to learn a phrase which will banish any wraith on this level simply by talking to them. This will be especially useful when you reach N.

Resting on the lake bottom are a pair of chests, one each near the piers on the east and west ends. Additionally, in the water to the left of the pier at Point M lies a Coffer of Restoration. 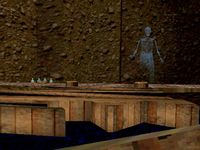 The Wraith of Paxti Bittor waits on the dock 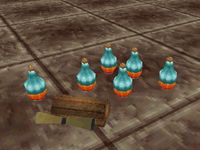 Some helpful items from your companion

At the other end of the lake is another dock. Here, you find a small alcove containing several useful potions and items, all guarded by the Wraith of Paxti Bittor, the traitor who caused this whole mess. Listen to his story and you will learn that, in turn, the Daedra betrayed and killed him, turning him into a wraith. He mentions the name of Sirran Angada, a minion of Jagar Tharn who betrayed him and had a hand in taking over Battlespire. Unfortunately, Angada uses a transmorph spell to appear as anyone he wants to, making him difficult, if not impossible to find. Bittor will lose control of himself after a short while, so you must avenge the deaths of the battlemages by ending whatever life Bittor has left in him. You can easily kill him by using the scroll from the hidden cave, or fight a long and arduous battle.

Among the items on the dock are another letter from your friend, who seems to be barely surviving. They were able to leave behind a Yoodt Sigil of Entry for you, which will be useful, along with some potions. 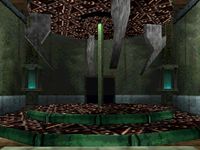 A pair of Hekem warding runes float here. Using the Sigil of Entry you found at Point K, you can pass through them unhurt. The room beyond is dominated by a strange rotating device, which can be very disorienting if you aren't careful. The room to the west and alcove to the east contain numerous helpful items, so take what you need. In the southeast corner of the room, you will find a Rod of the Pillar. Take it and head onwards.

There is a Yoodt Sigil of Warding here which blocks your path unless you have the Sigil of Entry left for you by your friend at Point N. 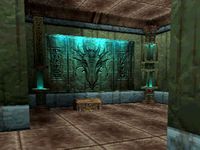 In the northwest corner, you find a Rod of the Passage cleverly hidden near a column. Take it. 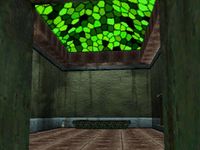 In this small room you find another coffin locked by a riddle. Using the answers you found previously, you find the answer to be "boat" (alternatively "a ship", "rowboat", "craft", "vessel", "skiff", or "dinghy"). Once again you fail to get any sort of useful information from the soul within, but there are some items to loot.

The sarcophagus of an Ideal Master

A similar coffin and soul gem lie in this room, but with no password protection. After a good deal of discussion, this Ideal Master proves more helpful than his compatriots, describing in detail what you need to do to activate the teleporter in the Chapel of Love (Point T). You need to collect the three Rods (Points L, O and Q) and insert them into the pedestal between the two mana beams (which you must first turn on). Once this is done, the gate will open and take you to any destination in the outer realms, provided you know its name. If you have read the scroll your friend left you at Point B, you know the Daedra are headed to a place known as Shade Perilous.

The Chapel of Love

Here you find the device mentioned by the Ideal Master at Point S. Following his instructions, flip the switches at the base of each pillar on the north and south to turn on the mana streams. Jump into the pool of water to teleport atop the device, then put the three Rods into the pedestal. Once the path is open, head down to the double doors, and say "Shade Perilous" when asked your destination. Step inside and you will be off to Level 4. 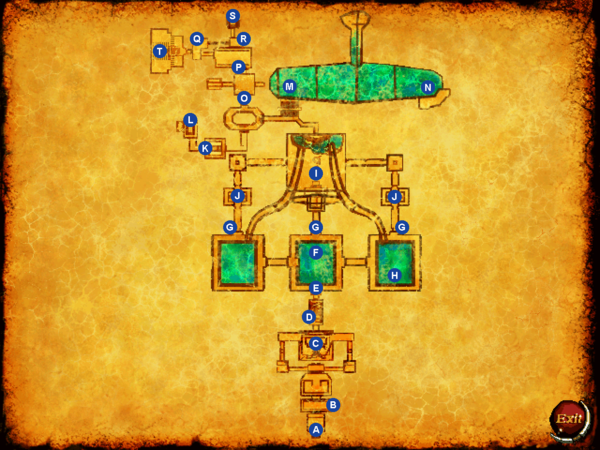