Return to the Urshilaku Camp
So you've successfully rescued Mehran Milo and have found the lost prophecies from Gilvas Barelo in the secret Holamayan hideout for Dissident Priests. You should recall that Nibani Maesa up in the Urshilaku Camp told you to come back and see her once you've found these prophecies, and now is the time to do that. Again, there's no wrong way to get to the camp, though if you're in Holamayan still, the quickest way would be to use an Intervention scroll/spell to get out and continue on from there. Since I was playing a warrior I just hoped back on the boat to Ebonheart, then on to Hla Oad, Gnaar Mok, and finally Khuul which is the closest I could get to the camp.
Learn of the Seven Trials
Once you arrive at the camp, go and see Nibani in the Wise Woman's Yurt again and talk to her about the lost prophecies. She says, if a round about way, to come back in a day once she has thought about all you have told her. Once the day is up, she is ready to give you her judgement. It appears that you have at least convinced Nibani that you are the Nerevarine. Your task now, guided by Nibani, is to lift the seven curses of Dagoth Ur, walk the path of the Seven Vision, and pass the Seven Trials.

The 1st trial is simple, you were born on an unknown day to unknown parents. You have also fulfilled the 2nd trial as you are now immune to all diseases. For the 3rd trial you must again talk to Sul-Matuul in the camp and, once fulfilled, return to Nibani for guidance in the remaining trials.

Sul-Matuul and the Third Trial
Asking Sul-Matuul about the 3rd trial reveals that he wishes you to pass a warriors test by braving the halls of Kogoruhn, an old base of House Dagoth, before telling you the 3rd trial. You are to retrieve three tokens from Kogoruhn: A Corprus Weepings from a Corprus Beast, a cup with the mark of House Dagoth, and the Shadow Shield which lies in the tomb of Dagoth Morin, deep in the laval tunnels beneath Kogoruhn. Once this is done, Sul-Matuul will reveal the 3rd test to you. Once you ask him about Kogoruhn, the place should be marked on your map, a ways South-East of the camp. You can follow the directions Matuul gives (which are not copied to your journal) or just hike it and check your map frequently.
Kogoruhn
Kogoruhn is a large structure which is hard to miss and has 5 different entrances. There is also a corpse of Feril Salmyn on the structure which has some nice Indoril Heavy armour amoung other things which could be useful. The Dome of Pollock's Eve, the Dome of Urso, and the Temple of Fey are all small, one room, shrines, each with its own Dagoth. Fey and Urso contain Dagoth's Uvil and Reler who are actually quite tough spellcasters, so be careful before you enter these rooms. Pollock has Dagoth Girer who is not quite as tough as the other two (but no pushover at low levels).

The cup and the Corprus Weepings can both be found in the Dome of Pollock's Eve. The cup is on the table (named as a House Dagoth Cup) and the Weepings can be found under the Urn in the center of the room. You can also find Weepings on any random Corprus monsters which wander around the other halls. Unfortunately, the Shadow Shield is buried much deeper within Kogoruhn.

To reach the shield you can enter the Hall of the Watchful Tomb or the Hall of Phisto sections. Either way, you will need to reach the Bleeding Heart section. This can be reached by passing through the Hall of Phisto, Hall of Maki, Nabith Waterway, Charma's Breath, and finally to Bleeding Heart. If you kill Dagoth Ulen in the Vault of Aerode, you will get a key to the Nabith Waterway, otherwise you can just pick the lock or use an Open spell. As you can see, its quite a walk and there are a number of monsters which pass along the way. Some of the monsters include (some may be random):

There is also a good deal of loot along the way including some Ebony weapons, and Glass armour. The Shadow Shield is lying on a stone near where you encounter Dagoth Elam. There are also some Daedric Gauntlets and an Orc Warhammer in the same area. Once you get all three items you can return to Sul-Matuul in the Urshilaku camp.
Learn the Third Trial
Sul-Matuul congratulates you on acquiring the three items and proceeds to tell you of the 3rd trial. The 3rd vision states In caverns dark Azura's eye sees/and makes to shine the moon and star. You are to travel to the Cavern of the Incarnate and look for the moon and star. The secret of the Cavern is set in a riddle: This riddle is known as Wisdom's Test. You must find the moon and star and return it to Nibani Maesa. You are rewarded with the Malipu-Atamna's Belt.
Third Trial Riddle 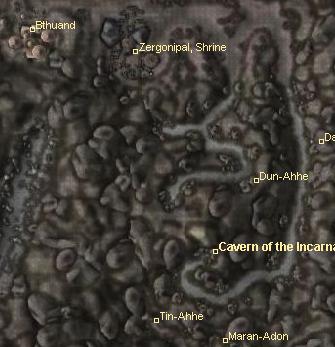 To find out the solution to the riddle, have a chat with the Ashlanders in the camp as suggested by Matuul. You may need to speak to several people to get the full story. The eye of the needle refers to a tall rock column in the Valley of Wind. The skin of the pearl similarily refers to the very top of the needle. The teeth of the wind refers to Airan's Teeth, two rock spires marking the entrance to the Valley of the Wind. The spires are named after the name of the seer, Airan and Azura. The valley is on the North-East slope of the Red Mountain in the center of the island. The mouth to the valley is just East and South of the Daedric Shrine of Zergonipal which should now be marked on your world map. The last clue refers to the star which is actually Azura's Star which is only visible at dawn and dusk (6 to 8 am and pm).

What it boils down to is that a door at the base of the needle will be open only during the dawn and dusk hours. Too reach it, head towards the Daedric Shrine of Zergonipal and just East of it, head South. You should find two parallel valleys, take the one to the East marked by two tall rock spires (Airan's Teeth). Walk all the way to end of the valley and wait for the correct time for the door to open (position is using the console command TDT).

Cavern of the Incarnate
Once you enter the cavern, pick up the Moon and Star Ring held by the statue of Azura to start a cut-scene. You have now passed the first three trials and indeed have become the Nerevarine. Don't forget to talk with the ghosts of failed incarnates to get some nifty items (each one has a different phrase that will trigger them to give you the gifts, some aren't all that great, but its the thought that counts).
The Forth and Fifth Trials
Your mission now (should you choose to accept it) is to have the four Ashlander tribes acknowledge you as the Nerevarine and the three Great Houses acknowledge you as the Hortator (or war leader). These are the forth and fifth trials. After each is complete, you can return to Nibani for guidance. You'll also notice that after this you have made new friends and enemies. Both the Temple and House Redoran become you enemies (unless you area member of the House) and the other factions don't seem to be pleased either.
Helpful Console Cheats
Give Yourself the Dagoth Cup: player->additem "misc_goblet_dagoth", 1
Give Yourself the Shadow Shield: player->additem "shadow_shield", 1
Give Yourself a Corprus Weepings: player->additem "ingred_corprus_weepings_01", 1

Continue on with the Ahemmusa Tribe portion of the main quest or return to the Main Quest page.

If you have any problems, suggestions or comments on this page or website, please feel free to use the Contact Form to send a message to the WebMaster.
This document was last modified on: Tuesday, 15 February 2011, at 20:29:29 and has been accessed 83226 times ( /morrow/quest/mq_kogoruhn.shtml ).